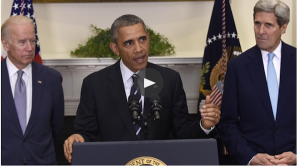 President Barack Obama rejected Friday the construction of the Keystone XL transnational pipeline, in part on grounds that approving the politically contentious project would have undercut U.S. leadership on the world stage in addressing climate change.

The proposed Keystone XL pipeline sought to move daily as many as 830,000 barrels of Canadian crude oil from Alberta tar sands fields to refineries in the Gulf of Mexico. The proposed project would have stretched 1,100 miles, crossing the U.S.-Canadian border in Montana before linking with already-constructed Keystone pipelines. Unlike the southern leg, the northern leg, due to crossing an international border, required federal approval. END_OF_DOCUMENT_TOKEN_TO_BE_REPLACED 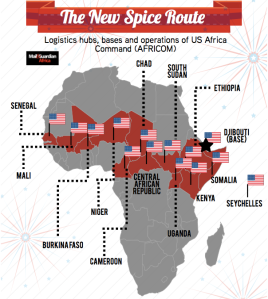 NIGERIA has welcomed a US decision to send up to 300 military personnel to Cameroon to help the regional fight against Boko Haram, despite having itself requested more direct help from Washington.

President Muhammadu Buhari’s spokesman Garba Shehu on Thursday said the deployment was a “welcome development” while the military said it demonstrated cooperation was needed against the Islamists.

Washington last year provided intelligence, surveillance and reconnaissance expertise to Nigeria in the hunt for more than 200 schoolgirls abducted from their school.

The assistance included drones and spy planes as well as up to 80 military personnel sent to Chad’s capital, N’Djamena. In 2013, the US set up a drone base in neighboring Niger.

But the US is not only involved in fighting back Boko Haram on the continent. In recent years, the US has quietly ramped up its military presence across Africa, even if it officially insists its footprint on the continent is light. The decisive point seems to have been the election of  President Barack Obama in 2008. END_OF_DOCUMENT_TOKEN_TO_BE_REPLACED

WASHINGTON Facing throngs of people on the National Mall, Nation of Islam Minister Louis Farrakhan called for justice Saturday, Oct. 10, as he rallied African-Americans, Latinos and others during an anniversary protest at the U.S. Capitol.

In a speech that lasted more than two hours, Farrakhan said the United States was hypocritical for insisting other nations were violating human rights, all the while describing its own misconduct as something that causes Americans “dissatisfaction.”

His “Justice or Else!” event came 20 years after hundreds of thousands of black men came to the same stretch of lawn between the Capitol and the Washington Monument to rededicate themselves to being better fathers, sons and citizens.

Farrakhan’s remarks were preceded by supporters of the “Black Lives Matter” movement along with Latino, Native American and Palestinian activists who took turns at the microphone urging better treatment.

The sunny fall day brought out hundreds of thousands, according to organizers, though no official estimates were available. The crowd was predominantly black, ranging from millennials in “Black Lives Matter” T-shirts to Nation of Islam adherents with women in brown headpieces and matching garments. END_OF_DOCUMENT_TOKEN_TO_BE_REPLACED

In the blazing midday sun, hot and thirsty little children walk around bags of diapers and soft suitcases piled outside a locked community center in the Lower Ninth Ward. Military police in camouflage and local police in dark blue uniforms and sunglasses sit a few feet away in their cars. Moms and grandmas sit with the children and wait quietly. Everyone is waiting for a special city bus which will start them on their latest journey away from home. END_OF_DOCUMENT_TOKEN_TO_BE_REPLACED