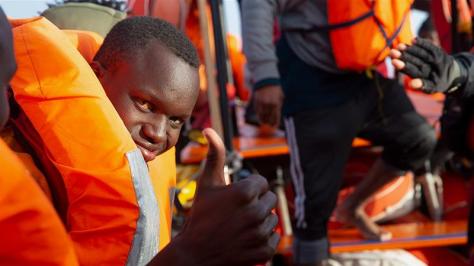 Onboard the Ocean Viking – Ninety-four refugees and migrants, including four pregnant women, have been rescued by a charity ship off the coast of Libya.

The Ocean Viking, operated jointly by SOS Mediterranee and Doctors Without Borders (Medecins Sans Frontieres, or MSF), carried out Tuesday’s rescue mission after being notified of a boat in distress at 4am local time (03:00 GMT).

“We were copied on an email sent to the Libyan coastguard by AlarmPhone this morning. As a result, we altered our course towards the potential boat in distress and arrived in the area 90 minutes later,” Nicholas Romaniuk, search and rescue coordinator for SOS Mediterranee, told Al Jazeera onboard the Ocean Viking.

The people rescued 42 nautical miles (78km) off Libya’s coast include 56 adults – 45 male and 11 female – and 38 children, of which at least 29 were unaccompanied. Four of the children are aged below five, with the youngest less than one-year-old.

“The weather conditions were not terrible for us but if it’s a rubber boat you’re on, one that is not certified to carry any weight, it can be deadly with the waves,” Romaniuk said. People were in danger of dying on that boat so we didn’t hesitate to send our rescue boats out, hand out life jackets to stabilise the situation before making sure everyone was transferred onboard the Ocean Viking.”

More than 1,000 people have been feared drowned in the Mediterranean this year, according to the International Organization of Migration (IOM). Almost 700 of those have been recorded in the central Mediterranean, with refugees and migrants embarking on the dangerous journey to Europe from Libya.

“Everyone’s condition is stable,” said Michael Fark, the MSF’s project coordinator onboard the Ocean Viking, adding that one of the women was heavily pregnant.

“We will continue to monitor her situation. People are resting now as they are quite tired from the journey and the emotions they have gone through.”

A Libyan coastguard boat approached the Ocean Viking following the successful embarkation of the refugees and migrants, ordering it to alter course before asking for details about the operation.

“As they approached us, they contacted us and asked for information regarding the rescue,” Romaniuk said.

“We are in international waters and out of any jurisdiction but due to the situation out here, we complied. It was the responsible thing to do.”

The Ocean Viking has rescued more than 1,000 people since it started operations in August this year.

Last year, the Aquarius, another joint operation run by SOS and MSF, was forced to shut down after rescuing almost 30,000 refugees and migrants in the central Mediterranean. 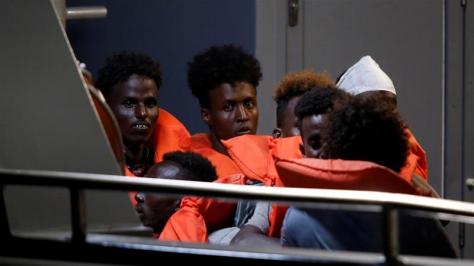 At least 44 people, including infants, have been picked up from their stricken vessel off Libya’s coast in the Mediterranean Sea, according to a German charity operating the ship that rescued them.

Malta agreed to take in those rescued by the Alan Kurdi ship and was sending a vessel to pick them up, the Sea-Eye charity said late on Monday. There was no immediate confirmation by Maltese authorities.

Sea-Eye said it was alerted to the plight of the people in need of rescue by Tunisian fishermen and the Colibri civilian search plane.

“Forty-four people, including four women and three children,” were brought on board the Alan Kurdi, Sea-Eye said. The children are aged 15 months, three years, and five years.

The rescued people, who come from Syria, Libya, Pakistan, Bangladesh and Guinea, said they had left Zuwara in Libya early on Saturday in a wooden boat, according to AFP news agency.

The Alan Kurdi last week rescued 65 shipwrecked people attempting the perilous journey to reach Europe, and handing them over to Malta on Sunday after Italy’s far-right Interior Minister Matteo Salvini closed his country’s ports to the vessel.

They have already been sent on to other European Union countries, but it is not clear what would happen to those most recently rescued.

An Italian customs vessel, run by the NGO Mediterranea, on Tuesday brought 47 rescued people into Sicily’s Pozzallo port, Italian media reported. They had been headed to the Italian island of Lampedusa, between Sicily and Libya, but there was no space for them there as hundreds of refugees and migrants continue to arrive by their own means or are rescued by authorities.

Salvini has vowed to close Italian ports to charity rescue ships, which he accuses of helping people smugglers. Interior Ministry figures showed that 395 people have arrived in Italy since the end of June.

Italian media reported on Tuesday that this year barely one in 10 migrants and asylum seekers has been brought into Italy by charity vessels, the vast majority arriving by other means.

Italy last month issued a decree that imposes fines of up to 50,000 euros ($57,000) for the captain, owner and operator of a vessel “entering Italian territorial waters without authorisation”.

Authorities on Lampedusa in late June seized a rescue ship belonging to German aid group Sea-Watch, which had forced its way into port with dozens of rescued people on board, and arrested its captain, Carola Rackete.

An Italian judge subsequently ordered her freed, saying she had been acting to save lives.

Libya, which has been wracked by chaos since a 2011 uprising against the rule of late leader Muammar Gaddafi, has long been a major transit route for people, especially from sub-Saharan Africa, desperate to reach Europe.

Last week, 53 refugees and migrants were killed in an air raid on a detention centre in a Tripoli suburb held by forces loyal to Tripoli’s United Nations-recognised government.