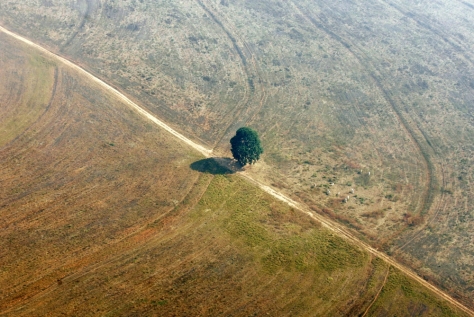 An aerial view shows a single tree seen on land that was previously jungle in Mato Grosso, one of the Brazilian states suffering from deforestation. (Reuters/Bruno Domingos)

There was a time when Br. Jaazeal Jakosalem had little success when he asked bishops in the Philippines to join campaigns against mining or coal-fired power plants endangering communities as well as the land.

It wasn’t that the bishops were ignoring the issues facing the environment — they’d written a half-dozen statements on the topic since the late 1980s. They just weren’t as visible in the struggle to do something about them, said Jakosalem, a lifelong environmental activist and a member of the Order of Augustinian Recollects.

The Philippines is one of the world’s front lines on climate change. Last week, Typhoon Vongfong slammed into the Eastern Samar province, forcing the evacuation of hundreds of thousands of people in a region that seven years earlier was decimated by Typhoon Haiyan. Climate scientists expect such tropical storms to become more powerful and more frequent as global temperatures rise.

Things have changed in the post-Laudato Si’ world.

Today, the Catholic Church of the Philippines is seen as one of the leaders in answering the call that Pope Francis issued to the entire world in his 2015 social encyclical, “Laudato Si’, on Care for Our Common Home.”

Since the encyclical’s release, Jakosalem, better known as Brother Tagoy, says more bishops have joined him and other religious in speaking out against the construction of new coal-fired power plants and the damaging effects of mining on both communities and the land. Last July, the Philippine bishops conference issued a pastoral letter on the “climate emergency,” calling the full church on the islands to an ecological conversion and to “activate climate action on behalf of the voiceless people and the planet.”

“They are emboldened to act more for the caring of our environment,” Jakosalem told EarthBeat in a phone interview.

Five years after the publication of Laudato Si’, you can easily find such examples across the world of individual Catholics, parishes and institutions responding to the pope’s own repeated appeal for ecological conversion with prayer and reflection over the encyclical but also with concrete actions in living it out.

Even with those examples, the consensus among Catholic ecological leaders is those responses have been not nearly as widespread as Francis sought with his universal call “for a new dialogue about how we are shaping the future of our planet.” Count the pope among them.

“Sadly, the urgency of this ecological conversion seems not to have been grasped by international politics, where the response to the problems raised by global issues such as climate change remains very weak and a source of grave concern,” Francis said in January in remarks to the Vatican diplomatic corps.

The call for increasingly urgent action from a historically slow-moving institution is driven by awareness of the numerous crises facing the planet.

The coronavirus pandemic struck at the start of a decade that climate scientists say is critical to reduce greenhouse gas emissions. Doing so would prevent the most severe consequences of climate change, which threatens to exacerbate poverty, hunger, lack of water access, and migration, all impacting first and fiercest the world’s already most vulnerable communities.

Already, global temperatures have risen 1 degree Celsius (1.8 degrees Fahrenheit) since the late 1800s. The planet is on pace to warm another 2 degrees C by the end of the century, and to reach the critical 1.5-degree mark as soon as 2030. Roughly 20% of the planet already has, according to a Pulitzer-winning report by The Washington Post.

“When we pass that 1.5 degrees threshold, climate change will move into all of our living rooms,” said Veerabhadran Ramanathan, a climate scientist at the Scripps Institution of Oceanography at the University of California San Diego and member of the Pontifical Academy of Sciences. “You don’t have to turn on TV to find out about climate change.”

The pandemic has some worried it may slow momentum for addressing climate change. But there is also optimism up to the highest levels of the Catholic Church that how the world responds, economically and otherwise, just may be the multitrillion-dollar stimulus needed to jumpstart the globe to match societal actions with the urgency of the science.

And perhaps Laudato Si’ can play a part.

“Laudato Si’ has an immense amount of wisdom to charter that path and just aid us in that journey,” said Tomás Insua, co-founder and executive director of the Global Catholic Climate Movement.