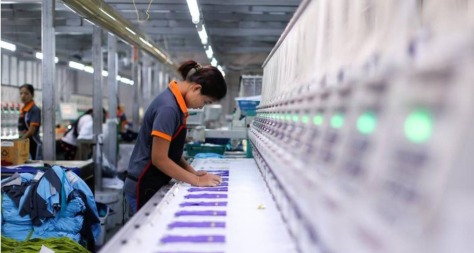 ARCHIVE PHOTO: A labourer works at a garment factory in Bangkok, Thailand, May 30, 2016. Picture taken May 30, 2016. REUTERS/Athit Perawongmetha

Sheico Thailand, which makes wetsuits for outdoor clothing retailer Patagonia, has made payments totalling more than $100,000 to about 170 Burmese workers, according to Finnwatch, a Finland-based watchdog group.

Between 2018 and 2019, the migrant workers had paid up to 18,500 baht ($559) in recruitment fees to agents and to Sheico in order to secure jobs at the factory, according to Thai charity Migrant Workers Rights Network.

Under Thai law, such fees – that cover visa costs, a health checkup and a work permit – are capped at 2,910 baht.

“We work closely with our suppliers to educate them on the human rights issues that recruitment fees can lead to and offer solutions to mitigate the risks of working with third party labour recruiters,” said Thuy Nguyen, a manager for California-based Patagonia, which confirmed compensation had been paid.

“We value Sheico’s commitment to meeting Patagonia’s migrant worker employment standards and capacity to continuously improve,” she told the Thomson Reuters Foundation in an email.

Patagonia, which is known for its environmental activism, began work on eliminating recruitment fees within its supply chain in 2014 and has developed a set of standards for migrant workers hired by its suppliers.

Sheico, which has its headquarters in Taiwan, did not respond to multiple requests for comment.

Thailand has about 3 million registered migrant workers mainly from Myanmar, Cambodia and Laos, but the United Nations estimates that at least 2 million more are working informally across the country.

There has been an increased effort to tackle excessive recruitment fees and debt bondage among migrants workers, as more industries and their consumers become aware of the problem.

In December, Cal-Comp Electronics, which supplies to tech giants such as HP Inc – said it would reimburse its workers in Thailand after a report found the Burmese migrants had to pay excessive recruitment fees.

“Patagonia’s response on this case was in many ways exemplary and provides a good model for other companies that face similar situations,” said Kultalahti.

“Such action requires countries to make human rights due diligence mandatory for companies. Voluntary measures have yielded unsatisfactory results, which is why Patagonia’s example is still so rare.”