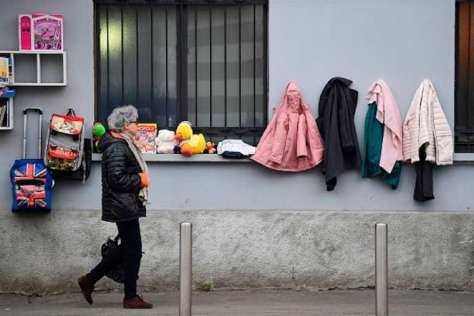 A woman walks past a “Wall of Kindness,” a charity work phenomenon, encouraging people to items such as winter clothing for the homeless, on Jan 25, 2020 in Milan. Credit: MIGUEL MEDINA/AFP via Getty

Rome, Italy, – While Italy is under nationwide quarantine to combat the coronavirus pandemic, Catholic charities throughout the country are doing what they can to help the poor and most vulnerable.

In Milan, the center of the Italian epidemic, the Caritas Ambrosiana Catholic charity network has kept open the doors of its shelters, soup kitchens, and food pantries, albeit with some modifications to help keep people safe.

“In the midst of the emergency we have tried to balance two principles: public health and the support of people in difficulty,” the spokesperson, Francesco Chiavarini, told CNA by phone.

At soup kitchens and food pantries, people are first checked for fevers and then enter in limited numbers. Night shelters and dormitories are now kept open during the day for the homeless.

“In this moment, life is very complicated for the homeless,” Chiavarini said, explaining that places where people without homes go to escape the region’s still cold weather, public libraries for example, are now all closed.

The Italian government has ordered people to remain at home during the quarantine, but people living on the street have no way to comply with that mandate.

“In some way, with this little initiative, we are trying to resolve this paradox,” the Caritas spokesperson said. “It’s a drop in the ocean really, but it’s what we can do.”

Milan’s Caritas hopes that during this difficult time, the shelters can become a “home” for those who do not have one.

People in northern Italy are “really, really worried,” Chiavarini said. As the number of cases grows, so does the risk of the collapse of the health service.

He encouraged Catholics to think of ways they can show closeness and solidarity to others, even while they cannot be physically near them.

Caritas Internationalis’ is helping refugees in Italy know what is going on with the coronavirus and what they should do.

In Rome, the Catholic lay community of Sant’Egidio has volunteers continuing to bring food to people living on the streets. Volunteers are also handing out products such as facial tissues and hand sanitizer to the poor.

The community’s soup kitchens also remain open with extra precautionary measures, such as limiting the number of people who can enter at one time, ensuring hygiene and physical distance between people.

Sant’Egidio encouraged people to do their part to combat isolation by reaching out with phone and video calls, letters, and messages to the elderly and disabled, especially those in institutions where they cannot be visited because of the risk of contagion.

In an interview with Vatican Media, the president of Sant’Egidio, Marco Impagliazzo, said it is important to remember the most vulnerable — such as the homeless, the elderly, and hospice patients — during this time.

“You have to find new ways to stay close to these people, naturally avoiding being infected and infecting, it is something that requires a lot of intelligence, a lot of creativity, and a lot of passion and love,” he said.