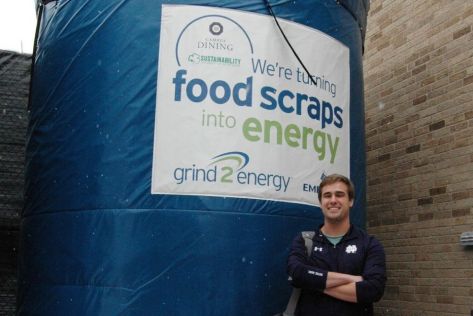 Notre Dame, Indiana — On the campus of the University Notre Dame with its “Fighting Irish” mascot, green is undeniably the school color during football season. But in recent years, the 177-year-old university with about 12,000 students has been going green in other ways — reducing its carbon footprint and working towards sustainability.

In 2016, the university adopted a comprehensive sustainability strategy that featured six major areas the university intended to work on. One of them was a commitment to reduce waste, including food waste. At Notre Dame, food waste comes primarily from its two main dining halls and from campus catering events. Food waste was painfully visible on home football game weekends. Thousands of fans came to campus to cheer, eat, drink — and discard what they didn’t consume.

“One of the first things I realized when I started working at the university was that we were generating an awful lot of waste on campus, and most of it was food,” recalled Allison Mihalich, senior program director at Notre Dame’s Office of Sustainability.

Until two years ago, Mihalich worked for the Environmental Protection Agency in Washington, D.C. She’s found campus culture very different than the EPA environment. Not everyone on campus is well informed about or even interested in environmental issues. But she saw that Notre Dame administrators had a growing commitment to sustainability and wanted to both recycle and rescue food.

Mihalich said she first encountered Matthew Magiera, a chemical engineering major from Pittsford, New York, in the university’s sustainability office conference room. His research notes and calculations were spread out across the table and floor. Collaborating with Campus Dining and the Office of Sustainability, Magiera had been tasked as an intern with calculating the amount of food waste from dining hall food trays and from catering.

It was quite a challenge for a sophomore college student, even an exceptionally committed and capable one. For months, “waste weighs” of food were painstakingly recorded, analyzed and re-analyzed.

Two years later, Magiera shies away from taking much credit for his critical food waste research. Nonetheless, the research soon led to Notre Dame’s installation of three Grind2Energy systems, one near each of the two dining halls and one by the catering office.

Last year, Notre Dame began utilizing the Grind2Energy systems in order to process its food waste and then send it to another site for anaerobic digestion, the biological break-down of organic material that produces biogas that can be used to generate electric power.