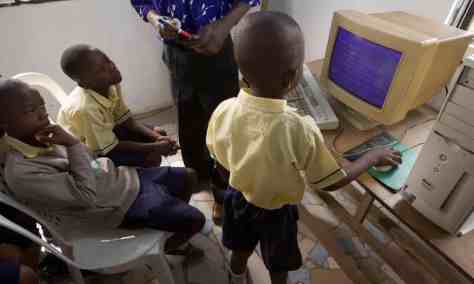 Computer lessons in Lagos. A national emergency response is needed to get all Nigeria’s children into quality schooling. Photograph: Cavan Images/Alamy

If you want a window on the condition of children in Nigeria, Africa’s most populous country, there is no better vantage point than the Katanga health centre in the impoverished northern state of Jigawa.

In a hut that passes for a nutrition clinic, a group of 25 women wait with their children. Tiny bodies bearing the hallmarks of acute malnutrition – distended stomachs and twig-thin limbs – are lifted into a weighing harness and their arms measured to check for signs of wasting. Ali, who has just reached his first birthday, weighs only 5kg – the average age of a two-month-old in the UK. His mother is 14.

Sitting under a tree in the forecourt, another severely malnourished child is gasping for breath. Nayo, who is seven months, has the telltale symptoms of severe pneumonia – a collapsed rib cage, deep cough and fever. He desperately needs antibiotics and medical oxygen. The clinic has neither. “I’m worried for his life, there is nowhere to go for help,” his mother tells me.

Nigeria is Africa’s largest economy and a global energy-exporting superpower. It is endowed with vast natural resources. But the country is rooted near the foot of the World Bank’s global league table for human capital – a composite measure capturing the health, education and nutritional status of children.

Five years ago Nigeria’s leaders joined the rest of the world in embracing the 2030 sustainable development goals. They include targets to end preventable child and maternal deaths, eradicate malnutrition and give all children a quality education. Almost half of Nigeria’s 200 million population is under 15, and achieving these goals would catalyse the dynamic and inclusive growth needed to create jobs.

Unfortunately, Nigeria is either treading water or sinking like a stone on all the key 2030 indicators for child development. More than 800,000 children lose their lives each year, mainly to preventable diseases such as malaria, pneumonia and diarrhoea. Over the past decade, the country’s share of global under-five deaths doubled – to 16% of the total – and continues to rise.

Malnutrition is endemic. Almost half of Nigeria’s children are stunted by nutritional deprivation, with devastating consequences for health and cognitive development. About 2 million face life-threatening malnutrition. Vaccination against killer diseases is critical for malnourished children. But millions of children in Nigeria have not been immunised.

More than 10 million children aged 5–14 years are out of school – more than in any other country – even though education is nominally free and compulsory. Most of those in school are getting a fifth-rate education after years of underinvestment. Children with eight years of schooling typically have learning skills equivalent to four years of primary education.

There are also deep fractures linked to inequalities in wealth, region and gender. Children born into the poorest 20% of families are eight times more likely to succumb to fatal illness. Young girls, especially those in the northern states, are far more likely to be forced into early marriage. Almost one in five girls are married by the age of 15, according to Unicef.

Nigeria’s child development crisis is a tragedy for the country. Over the next three decades the population will double, making Nigeria the world’s third most populous country. By 2050 almost one in every 10 children born in the world will be Nigerian. Sheer weight of numbers dictates that the fate of Nigeria’s children will shape the world’s development.

So what can be done to break the malaise?

First, Nigeria urgently needs to convert economic wealth into human capital, starting with investment in children. Current revenue collection levels are among the lowest in the world, holding back vital public spending in areas such as health and education. Changing this picture will require a broader and deeper tax base, with strengthened royalty collection from oil companies.

The federal government has passed some encouraging legislation on education and public health. But at 0.6% of GDP, Nigeria’s health spending is comparable to countries such as Yemen and Afghanistan. The result is clinics like the one in Jigawa, without trained health workers, medicines and vital equipment.

Second, a national emergency response is needed to get all children into quality schooling. Unlocking the potential of Nigeria’s children would transform the country.

That won’t be possible without a third component for change – a concerted drive to combat the deep inequalities facing girls and women. It is surely time for Nigeria’s politicians, as well religious and traditional leaders, to push for an end to child marriage – a practice that violates human rights, destroys opportunity and perpetuates poverty.