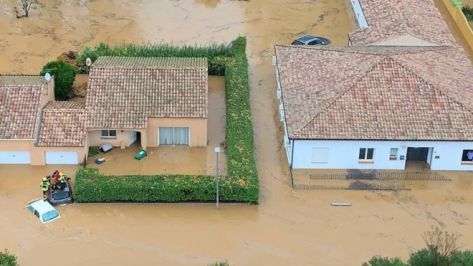 About 2,000 firefighters and rescue workers were deployed to the region, where rivers burst their banks, blocked roads and caused significant damage.

It is not known if a 68-year-old woman who was swept away from her home in Béziers is among the fatalities.

Flash floods also devastated parts of northern Italy and Spain this week, where three others died.

In a statement, the French interior ministry said the heavy rain was now moving down towards northern Corsica.

“Over the past three days, particularly severe storms have hit the south of France, causing three deaths and serious damage to the region,” the French Interior Ministry said in a statement.

“The rain continues and is now affecting the eastern coast of Haute-Corse. Everyone must remain vigilant.”

The town of Béziers saw 198mm (nearly 8in) of rain – or about two months’ average rainfall – in just six hours on Wednesday morning.

According to local media, the woman who was swept away by the floods in the town was found unconscious in a vineyard, about 100m (330ft) away. She was then taken by helicopter to hospital in Montpellier.

Dramatic images posted on social media showed cars submerged as the waters of the River Orb rose to dangerous levels.

In Hérault, forecasters said 240mm of rain fell in a 24-hour period – a 50-year record. Local prefect Jacques Witkowski told reporters that shelter had been given to more than 1,000 people whose homes had been flooded.