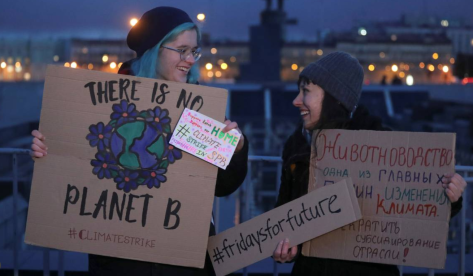 MOSCOW, (Thomson Reuters Foundation) – At 15 years old, Margarita Naumenko is one of the youngest participants in Russia’s Fridays for Future climate protest movement.

Each week, she stands in downtown Moscow with other young activists chanting, brandishing posters and demanding the government take action on worsening climate change threats.

Her parents support her decision to protest, Naumenko said, but they are less convinced about the urgency of slowing the climate change.

“I tried talking to them and changing their opinion,” she said. “But that is not easy.”

Led largely by young people, Russia’s nascent climate protest movement has taken on the challenge of changing minds in a country where, not long ago, both the public and politicians were sceptical about the need to act quickly on climate change.

The protests may be having some effect. Earlier this month, Russia announced it would join the 2015 Paris Agreement to fight climate change – one of the last countries in the world to do so.

The country is the world’s fourth largest emitter of greenhouse gases and was the biggest emitter not to have agreed to the landmark global climate deal.

Before the announcement, activists in Moscow held about 50 individual protests, after previously having been denied a permit to demonstrate as part of a large-scale global climate strike last week.

On Friday, as young climate campaigners again marched around the globe, about 85 protesters in Moscow held up red and white fabric to spell out the words “Act Now” in front of Russia’s main government building.

Naumenko joined the movement five months ago, inspired after attending a lecture on improving sustainability in the education system and after seeing Greta Thunberg, the 16-year-old figurehead of the youth climate movement, speak on television.

“I thought, ‘Why don’t I take any action?,'” Naumenko told the Thomson Reuters Foundation. “We have just one planet. If we do not care about it, who else will?”

Since the first mass eco-protest in Moscow’s Sokolniki Park in March – a day students around the world walked out of their classes to call for action on climate change – other Russian cities such as St. Petersburg, Nizhny Novgorod and Irkutsk, have joined the climate campaign.

For Arshak Makichyan, it was the March protest in Moscow that sparked his involvement in climate activism.

Since then, the 25-year-old violinist has become one of the faces of Russia’s youth protest movement, demonstrating every week, often on his own.

He also acts as one of the coordinators of the movement, and part of his job is to apply for official permission to protest, which can be a time-consuming and frustrating process, he told the Thomson Reuters Foundation.

New rules adopted after mass protests in Moscow that followed President Vladimir Putin’s 2012 election made it a criminal offence to stage some forms of non-violent protests without a permit.

Single-person protests, on the other hand, do not require a permit, Makichyan explained. But they do have restrictions – for example, in Moscow, protesters must not stand closer than 50 metres (160 feet) from each other.

Makichyan said that, so far, Russia’s climate activists have succeeded in getting permits for two large-scale environmental protests.

And the crowds at protests have been getting bigger over the past few months, he added. These days, an organised climate demonstration in Moscow attracts between 20 and 40 participants.

The number may be small compared to the thousands who come out for protests in other cities around the globe, but it is a big increase from when Russia’s activists first started, Makichyan said.

“The numbers have been growing,” he said. “Ten weeks ago, I was very often protesting on my own. Now every week we get more participants and new cities join in.”

Russia’s government has a history of cracking down on protests that it has declared illegal.

In a case in July that triggered global condemnation, police in Moscow detained more than 1,000 people for taking part in a protest calling for opposition members to be allowed to run in a local election.

Makichyan, who took part in that protest and was detained for three hours, said so far there have been no arrests during any of the climate protests.