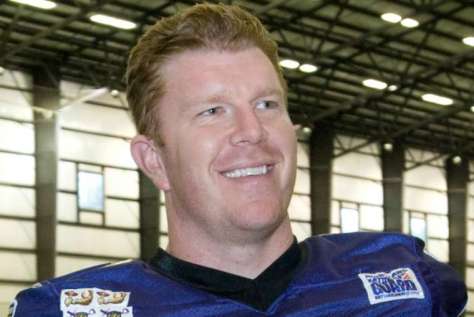 Minneapolis, Minn., (CNA)– Not everyone who goes to high school will go to college, the founders of a new Minnesota high school say, but everyone should be prepared for leadership, service, and virtuous lives.

Preparation for a good life, no matter what comes after graduation, is the goal of Unity High School, set to open this fall in Burnsville, Minnesota.

Matt Birk, a retired football player who played with the Minnesota Vikings and Baltimore Ravens, and Tom Bengtson, the owner of a small publishing company, are the founders of the school.

“We are college prep but we are not only college prep. Not everybody is a candidate for college, people choose different paths and we believe that there is equal dignity in any of these paths. We are happy to prepare kids for post high school life regardless of what it looks like,” Bengtson added.

Birk has been involved with education programs in underprivileged communities since 2002, when he was playing professional football. As a father of eight, he said he knows that not all kids thrive in a competitive academic environment, noting that a “high-stakes” test-taking culture is not for everyone.

“If you look back at the genesis of the American education system, I think the original charter says the goal of education is to teach knowledge and develop character. As the U.S. keeps falling on the global list of test scores, we just keep focusing more and more on the testing,” he said.

“Character has been pushed out of mainstream education because it is all about the test now,” he added.

Birk said that because public school funding is tied to test scores, education models focus on test-taking skills, instead of adapting to the needs of each learner.

Birk added that while not every student is meant for college, every person can be formed for success.

“If we are only doing it to show how well we can take a test, what’s the point?” he asked.

“If you go to an Ivy League schools is that a guarantee to a great life? No, no it’s not. I would say the most important thing to me … is that they would have a firm foundation in their Catholic faith, that would be number one, and then, number two, I would say to be equipped with some skills to be able to help them with whatever path they choose.”

Birk added that digital technology has been detrimental to some areas of ingenuity – communication, teamwork, and social and emotional intelligence. As a result of increased technology and media influence, he said students are suffering more narcissism and depression, while developing less empathy and abilities to handle anxiety.

Unity will aim to address those issues when it opens this fall at Mary, Mother of the Church Parish in Burnsville. To start out, the school will only teach high school freshmen, but it plans to add a new grade each year, until the first incoming class graduate as seniors.

The school will start small. It has about a dozen students enrolled right now, and its founders hope to bring in around 25 for the first year. It is also working to be recognized as an official Catholic school in the Archdiocese of St. Paul and Minneapolis.

Unity will focus on practical opportunities for students to develop skills in academics, character, leadership, and service.

Birk said the school will “be vigorously Catholic,” including opportunities for students to engage with an instructor who can foster “interior life and their personal relationship with Jesus.”

The former NFL center’s own faith is central to his life, he said. He is especially active in pro-life work. In 2013, after Birk’s team won Super Bowl XLVII, he declined to attend a reception at the White House.

“I have great respect for the office of the presidency, but about five or six weeks ago, our president made a comment in a speech and he said, ‘God bless Planned Parenthood.’ Planned Parenthood performs about 330,000 abortions a year. I am Catholic, I am active in the pro-life movement and I just felt like I couldn’t deal with that. I couldn’t endorse that in any way,” Birk said.

He said he hopes Unity School will form students who are committed to faithful Catholicism.

“We really want the faith to be alive, to really be a part of the kids’ lives, not just taking a religion class,” said Birk.

Citing the cardinal virtues of prudence, temperance, justice, and fortitude, Birk said, the Catholic faith has a great framework for building character. To foster character development, the school will be involved with long term service projects, like monthly outings to nursing homes, where the teens can get to know the people they are serving.

A major component of the school will be its “Real World Wednesdays.” On those days, the students will take “life skills” classes and character development, including opportunities to listen to guest speakers and undergo field trips and service projects.

The teens will learn entrepreneurship, leadership, interview techniques, resumes, and financial literacy. The students will also be exposed to trades, through courses and workshops in auto maintenance, metal or wood shop, or home economics.

The school will also partner with an organization called Pursuit Academy, which teaches ethical enterprise, encouraging students learn to become entrepreneurs, to plan and manage their future goals, and to be leaders in their communities. Among other things, the teens will learn about engaging with peer pressure, managing risk, and public speaking.

Birk said a focus of the “Real World Wednesdays” will be developing what he calls “the-other-people-matter” mindset.

Developing leadership skills and character “might not necessarily help them get an A on a test or score higher on their SAT, but they are going to be equipped with skills that they can use in their lives, whether it is in the careers or their marriages or as parents or as communities members.”

“Let’s get them some of that stuff,” he added.

In light of the school’s emphasis on both academic and practical skills, Unity has chosen two patron saints: John Paul II and Mother Teresa of Calcutta. These saints are not only modern figures for students to model after but fantastic examples of the school’s goals, Bengtson said.

“John Paul II had all this rich philosophy of the dignity of the human person, which we will be teaching at Unity High School, including Theology of the Body,” Bengtson said.

“Then you got someone like Mother Teresa who took that theology and put it into practice – reached out to the poorest of the poor and saw dignity in folks who were in extremely dire circumstances.”

“In my mind, I seem them as both the hands and the heart at work together,” he added.

Bengtson said the school is convenient financially and geographically. Tuition will be $6,500 for the first year, which is half or even a third of the prices at other Catholic schools, Bengtson said. He also said the school will fill a neighborhood need in the southern metro area of the Twin Cities.

“It’s a large geographic area with 10 Catholic grade schools, through eighth grade, who collectively are graduating 300 students per year. Most of those students will go into public schools,” he said.

“About 75 students will stay in the Catholic school system and they have to travel quite a distance to Catholic high school.”

The lower price does mean there will be tradeoffs, Bengtson said, noting that the school will have to improvise for a gymnasium, science lab, and auditorium. However, the school will have a thoroughly Catholic culture, he said, with Mass three times a week and a holy hour once a week, which is not offered at all Catholic schools.

“We are still very much like a typical school in a lot of ways, but we are tweaking the model. I don’t know where this goes, but hopefully it will show people that there is a better way to do it.”