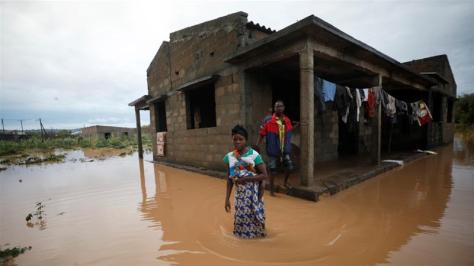 The rains grounded aid operations for a third consecutive day leaving some of the worst-hit communities cut off with very limited supplies.

A planned World Food Programme (WFP) flight to the island of Ibo was on standby until the weather improved, according to Deborah Nguyen, spokeswoman for the agency.

“We are really concerned about the situation for people on Ibo island,” she said, as they had been left out in the open after the majority of homes were destroyed, and with very limited food.

“For us, it’s a frustrating day … There is not much we can do to reach these islands now,” she said.

The government again urged residents of the main city of Pemba to flee to higher ground as flooding continued.

More than 570 millilitres has fallen in Pemba since Kenneth made landfall on Thursday, just six weeks after Cyclone Idai tore into central Mozambique.

This is the first time two cyclones have struck the southern African nation in a single season, and Kenneth was the first cyclone recorded so far north in Mozambique in the modern era of satellite imaging.

The latest storm has killed at least 41 people and destroyed tens of thousands of homes.

Up to 50 millilitres of rain were forecast over the next 24 hours, and rivers in the region were expected to reach flood peak by Thursday, the UN humanitarian office (OCHA) said, citing a UK aid analysis.

During a break in the downpours on Tuesday morning, some aid flights did manage to ferry supplies to the mainland district of Quissanga and the island of Matemo.

“These people lost everything,” said Gemma Connell, spokeswoman for OCHA. “It is critical that we get them the food that they need to survive.”

Women and children have been the hardest hit “without the basics that they need to get by,” especially shelter, she said.

The heavy rains also triggered a landslide at a rubbish dump on Sunday that killed at least five people, Pemba Mayor Florete Matarua told local TV channel STV. The people were all members of the same family and several other houses had also been buried, STV reported.

The death toll was expected to rise as government officials had yet to reach all areas hit by the storm.

Kenneth, packing storm surges and winds of up to 280 km per hour, devastated villages and islands along a 60 km stretch of coast in Mozambique’s north.

Nearly 35,000 houses have been completely or partially destroyed, the government said, and infrastructure and crops also ruined.

Preliminary government assessments suggest 31,000 hectares of crops have been lost in an area already vulnerable to food shortages, and fisheries and other key sources of sustenance like coconut trees were also damaged.

Authorities were also preparing for a possible cholera outbreak as some wells were contaminated and safe drinking water became a growing concern.

With the pair of deadly cyclones, Idai killed more than 600 people last month, Mozambique is “a very complex humanitarian situation,” said Connell, the OCHA spokeswoman. Only a quarter of the funding needed for Idai relief efforts has come in while funding for Kenneth has been slow.

“This is a new crisis,” she said. “We are having to stretch across the two operations. That is a basic reality we are dealing with every day.”