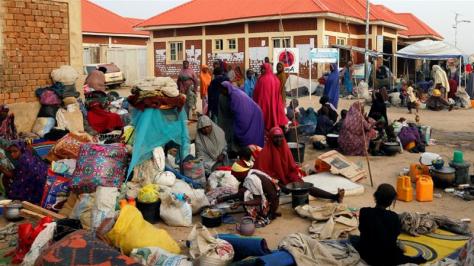 A surge in attacks in December saw tens of thousands of civilians fleeing into Maiduguri [File:Afolabi Sotunde/Reuters]

Up to 10,000 civilians have been forcibly relocated because of a military operation against Boko Haram in northeast Nigeria, the United Nations said on Thursday, calling for better protection.

At least 2,000 people were initially said to have been moved the 40km from Jakana to the Borno state capital, Maiduguri, on Tuesday. But the UN said five times as many were forced to flee.

“The military ordered the immediate departure and forced the relocation of up to 10,000 civilians in the middle of the night, without prior warning,” it said in a statement.

“The entire town of Jakana was emptied, and people were forced to move to Maiduguri with very little time to collect personal belongings,” added UN Humanitarian Coordinator Edward Kallon. “Some people said they arrived in Maiduguri with nothing, not even with shoes on their feet.”

The northeast is the battleground in Nigeria’s decade-long fight against the armed group of the Islamic State West Africa Province (ISWAP) and Boko Haram.

A surge in attacks in December in which towns and military bases were overrun saw tens of thousands of civilians fleeing into Maiduguri and swelling the population of existing camps.

The armed groups have in the last few weeks been hit by intensive air and ground offensives from coalition forces involving Nigeria, Chad and Cameroon in the Lake Chad region, according to military sources and armed fighters.

But there are fresh concerns about the effects of the conflict on civilians after nearly 10 years of fighting, more than 27,000 deaths and 1.8 million made homeless.

Previous mass displacements of civilians have forced them into already overcrowded camps for the internally displaced in Maiduguri, putting pressure on the authorities.

“The United Nations is urging the government to urgently provide safety, shelter, food, water and medical care to the displaced civilians, in addition to information about when they will be allowed to return home,” said Kallon.

Jakana lies on a known crossing route for ISWAP fighters moving between their camps in the Benisheikh forest area of Borno and their hideouts in the Buni Yadi area of Yobe.

In January, ISWAP sent letters to Jakana and Mainok residents telling them to vacate their homes for an impending raid on the military.