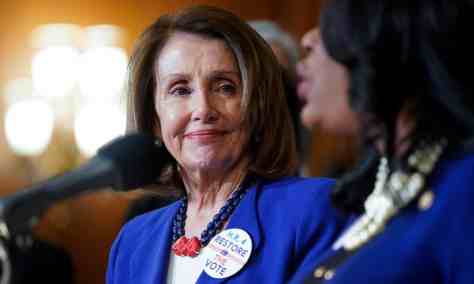 Nancy Pelosi on Capitol Hill on 26 February. For now the measure is a mostly symbolic gesture, not likely to be taken up in the Republican-controlled Senate. Photograph: Joshua Roberts/Getty Images

Gun control campaigners celebrated a precious win on Wednesday when the US House of Representatives passed its first major legislation on the issue in nearly a quarter of a century.

Members of Congress approved a measure requiring federal background checks for all firearms sales, including online and at gun shows, by 240 votes to 190. But for now it is a mostly symbolic gesture, not likely to be taken up in the Republican-controlled Senate.

Even so, Democrats characterised it as a significant move towards relaxing the gun lobby’s grip on Washington and addressing a national epidemic of gun violence, including the deaths of 17 people at Marjory Stoneman Douglas high school in Parkland, Florida, last year that prompted a fresh surge of activism.

The bill, HR 8, bans firearms transfers by a person who is not a licensed dealer but its exemptions include “gifts to family members and transfers for hunting, target shooting, and self-defense”, the House judiciary committee website says.

In a debate on the House floor on Wednesday, the speaker, Nancy Pelosi, said: “Here are the facts: nearly 40,000 lives are cut short every year from gun violence. An average of 47 children and teenagers are killed by guns every single day.

Democrats made the case that 97% of Americans support background checks, including 94% of gun-owning households. More than a hundred gun violence survivors, student activists and other campaigners, including Connecticut senator Chris Murphy, watched from the House gallery.

The bill passed largely along party lines with only eight Republican members voting in favor and two Democrats against. A late, Republican-backed amendment requires Immigration and Customs Enforcement (Ice) to be notified when illegal immigrants attempt to buy a firearm.

The bill is the first of two that Democrats are bringing to the House floor this week as part of an effort to tighten gun laws following eight years of Republican control, which in June 2016 saw Democrats stage a sit-in protest over 26 hours. The other would extend the review period for a background check.

But neither bill stands much chance of success in the face of the Republican-controlled Senate and veto threats from Donald Trump. John Thune, the Republican majority whip in the Senate, told CNN it is “unlikely” his party will take up the bill for debate any time soon.