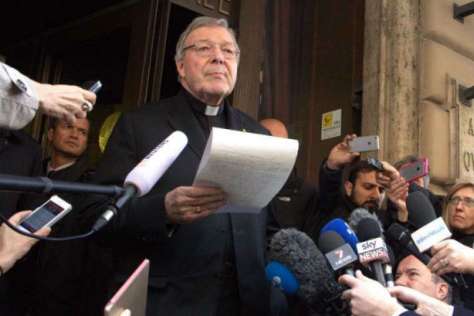 The decision of the County Court of Victoria was reached on December 11, 2018, but not widely reported until this week, following the imposition of a sweeping gag order by the court in June of last year. Pell was convicted on five counts of child sexual abuse against two former choristers in Melbourne Cathedral in 1996.

The statement from the Holy See press office, issued Feb. 26, acknowledges the “painful” news which has “shocked many people.”

“As already expressed on other occasions, we have the utmost respect for the Australian judicial authorities,” the statement said.

“Out of this respect, we await the outcome of the appeals process, recalling that Cardinal Pell maintains his innocence and has the right to defend himself until the last stage of appeal.”

The statement confirms that Pell has been barred from public ministry and from contact with minors during the course of the legal process, and will remain so during his appeal.

“In order to ensure the course of justice, the Holy Father has confirmed the precautionary measures which had been imposed by the local Ordinary on Cardinal George Pell when he returned to Australia. That is, while awaiting the definitive assessment of the facts, as is the norm, Cardinal George Pell is prohibited from exercising public ministry and from having any voluntary contact whatsoever with minors.”

The lifting of the court imposed gag order followed the decision by local prosecutors to drop further charges related to Pell’s time as a priest in the 1970s. With the proposed second trial cancelled, Chief Judge Peter Kidd lifted the reporting restrictions.

Pell is expected to be sentenced on Wednesday and is appealing the conviction.

The Vatican statement followed a similar release by Archbishop Mark Coleridge of Melbourne, president of the Australian Bishops’ Conference.

“The bishops [of Australia] agree that everyone should be equal under the law, and we respect the Australian legal system. The same legal system that delivered the verdict will consider the appeal that the Cardinal’s legal team has lodged. Our hope, at all times, is that through this process, justice will be served,” Coleridge wrote.

“In the meantime, we pray for all those who have been abused and their loved ones, and we commit ourselves anew to doing everything possible to ensure that the Church is a safe place for all, especially the young and the vulnerable.”