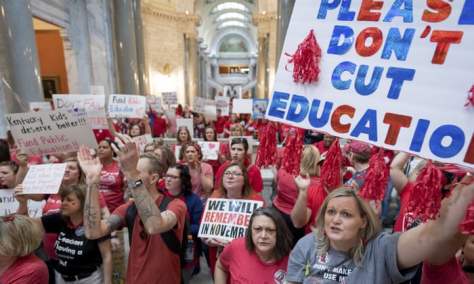 Teachers from Kentucky gather inside the state Capitol in April to rally for increased funding. Photograph: Bryan Woolston/AP

Educators in Los Angeles, the second-largest school district in the country, are going on strike on Monday. By deciding to walk out for smaller class sizes, more support staff, fewer standardized tests and charter school regulation, LA’s teachers have ensured that California will be the next state hit by a strike wave that shows no signs of ebbing anytime soon.

The teachers’ upsurge was one of the defining stories of 2018. It began in West Virginia, where teacher and support staff decided to shut down the schools until their demands for better pay and healthcare were taken seriously. They won big, and they inspired educators across the nation to follow their example. Work stoppages soon swept across Oklahoma, Arizona, Kentucky, North Carolina and Colorado. Though not all their demands were met, teachers won major gains and changed the national conversation about the reasons for public education’s crisis.

Confounding all expectations, most of these actions erupted in Republican-dominated regions with relatively weak labor unions, bans on public sector strikes, and electorates that voted for Donald Trump in 2016. Media pundits dubbed this a “red state rebellion”. But blue states are hardly immune to low pay, underfunded schools and frustrated teachers. Last fall, educators across Washington and charter school teachers in Chicago joined the strike wave – and strikes are now looming in Los Angeles as well as Oakland, threatening to disrupt business as usual for tens of millions of people on the west coast.

Above all, the teacher revolt expresses a rejection of the austerity and privatization agenda pushed by both Democrats and Republicans, particularly since the Great Recession. Today, 29 states have lower education funding than they did in 2008, and nationwide, education funding is still about $450 lower per student than it was a decade ago, according to a Center on Budget and Policy Priorities report. Last year, educators across the nation reached their breaking point, finally squeezed too tight by rising living costs, crumbling schoolhouses, and an encroaching school privatization campaign that opportunistically treats the crisis caused by underfunding as a pretext to further erode public education and labor unions.

However, 2018 wasn’t just the year that teachers had enough. Something else happened, too. West Virginia and subsequent battles have hammered home one of the labor movement’s most fundamental (and forgotten) lessons: strikes are the most powerful tool at working people’s disposal. Teachers have been rallying and lobbying against public education budget cuts for years – yet it was only once they began striking that politicians were forced to start making concessions.

At most times, in most places, workers feel powerless in the face of management. But when they organize to bring work itself to a halt, the balance of power fundamentally shifts. Suddenly the true importance of workers’ labor is laid bare, and the powers-that-be have a crisis on their hands. Strikes transform ordinary working people with little wealth and political clout into a force to be reckoned with. And all that’s necessary to tap into this game-changing, table-turning power is for workers to recognize the extraordinary value of their work, and organize with each other to withhold it.

Yet strike numbers have been declining for decades and it’s not hard to figure out why. Fewer workers are represented by unions than at any point in the last 70 years, thanks largely to a ruthless corporate offensive against the labor movement and basic union rights, including the right to strike. Unfortunately, most union officials have responded by retreating into a self-defeating reliance on electing and lobbying mainstream Democrats, instead of building disruptive strikes.

The teachers’ upsurge points the way forward for unions and the working class. But it will face new challenges in 2019. With the movement now spreading to the blue states, educators and their unions will no longer be primarily battling Republican politicians. To win in a city like Los Angeles means nothing less than taking on the Democratic party establishment. The corporate-funded drive to privatize LA’s public schools is not led by acolytes of Donald Trump. To the contrary: Austin Beutner, the billionaire investment banker installed as superintendent by deep-pocketed backers of school privatization, is a proud liberal and a longtime funder of the Democratic party.

Confronting Democratic politicians won’t come easy to many union leaders and educators, but the success of the movement depends on it. And if the strikes continue to spread, expect this growing labor militancy to exacerbate the polarizing intra-party struggle between the Democratic establishment and insurgent forces led by socialists Bernie Sanders and Alexandria Ocasio-Cortez.

Winning in 2019 will also require foregrounding progressive taxation. Though districts and states can afford to make some immediate concessions – LA, for example, is sitting on $1.86bn in financial reserves – public education’s crisis can’t be solved without a massive re-investment in our schools. But who will pay for this? Against the inevitable attempts of mainstream politicians to pit teachers against other workers by cutting other social services or raising regressive taxes, educators and their unions will have to convince the public to join the fight for the only equitable solution: tax the billionaires and corporations.

The stakes are high. Public education remains one of the few remaining public goods in the United States. For that very reason, corporate politicians are doing everything they can to dismantle and privatize the school system. But if the teachers’ upsurge can reverse this offensive, there’s little reason to assume that working people will stop there. Saving public education may be the first step towards building a revitalized labor movement capable of bringing many of society’s basic necessities – from healthcare to energy production – into the public sphere.
https://www.theguardian.com/commentisfree/2019/jan/14/la-teachers-working-class-power-labor-strikes