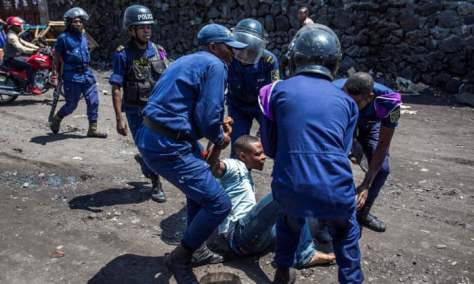 Police arrest a man in Goma during a protest against the postponement of the general election, blamed on an Ebola outbreak and rising violence. Photograph: Patrick Meinhardt/AFP/Getty Images

Congolese security forces have violently put down protests that broke out after the country’s presidential election was postponed by three months in key opposition strongholds.

In the eastern city of Beni, armed men fired live rounds and teargas at protesters demonstrating against the changes on Thursday. Protesters allegedly attacked the office of the agency coordinating the Ebola response and invaded an isolation centre, causing dozens of patients to flee.

The latest electoral delay in Africa’s second-biggest country will exclude more than 1.2 million people from the 30 December vote and is expected to favour the ruling party and its candidate, Emmanuel Ramazani Shadary, handpicked by the incumbent, Joseph Kabila.

On Wednesday the national electoral commission (CENI) announced a delay of the vote in Beni, Butembo and Yumbi and surrounding rural areas until March, long after the new president is due to be sworn in.

The commission blamed the DRC’s devastating outbreak of Ebola and potential terrorist attacks for the delay, which may lead to votes in the three affected areas not being counted in the election.

“Elections lead to important movements of voters toward polling places, thus leading to concentrations of people … raising the risk of propagation of this disease and providing the conditions for terrorist attacks,” the CENI said in a statement.

The health ministry had previously said the Ebola outbreak, which has killed 354 people in eastern Congo and is the second largest to date, would not prevent the vote from going ahead.

The election was due to be held on 23 December nationwide, but was postponed by a week. Many Congolese voters who travelled from neighbouring countries to cast their ballots had to leave before they could do so.

The government has not explained how it will take account of the delayed votes in Beni, Butembo and Yumbi.

Kabila, who came to power after his father was assassinated in 2001, won elections in 2006 and 2011. But when his mandate expired in 2016 and he was prevented by the constitution from running again, he did not step down. Instead the CENI announced it had not held a census to find out how many voters there were and did not have the $1bn (£790m) it said it needed to conduct an election.

Opposition leaders said Kabila was behind the decision to postpone the election, and this was buttressed by a constitutional court ruling that he would stay on as president in the event of electoral delays.

Shadary, who is accused of obstructing the electoral process and of serious human rights abuses, is one of 14 senior officials the EU has placed under sanctions for three years running. On Thursday the Congolese foreign ministry announced it would expel the bloc’s ambassador, Bart Ouvry, in response to the EU’s decision to renewthe sanctions two weeks ago despite a plea from the African Union to drop them.

Meanwhile, the opposition to Shadary is shaky. Two major political leaders were excluded from the election on technicalities, and the remaining opposition has failed to unite around a single candidate. The two main candidates are Martin Fayulu, a former oil executive, and Félix Tshisekedi, son of the late Étienne Tshisekedi, Kabila’s old foe and a popular stalwart of the opposition.

Millions of Congolese are struggling to survive. Five million have been displaced and 13 million are in need of help after decades of conflict. Hundreds of armed groups contribute to the instability in the east, while people in Kasai are struggling to recover from the 2016 conflict between government forces and the Kamuina Nsapu movement.

Analysts say business interests are behind what has been framed as an inter-communal conflict in the province of Ituri. Insecurity is preventing health workers from getting to many areas with suspected Ebola cases, leading to more infections.

The epidemic of rape, which activists say began in the mid-1990s, has continued unabated throughout Kabila’s presidency; in October the new Nobel peace prize winner Denis Mukwege told the Guardian he held the president personally responsible for not protecting the country’s women, along with his “illegal and illegitimate” government.
https://www.theguardian.com/world/2018/dec/27/congolese-soldiers-fire-air-quell-protests-against-election-delay