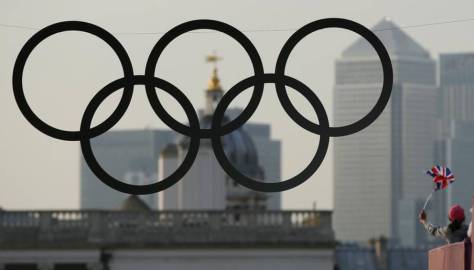 A child waves an Union flag near Olympic rings at the entrance of the venue for the men’s modern pentathlon during the London 2012 Olympics at Greenwich Park August 11, 2012. REUTERS/Brian Snyder

WASHINGTON,  (Thomson Reuters Foundation) – An “evil” man who tried to traffic a teenage boy into London to be sold for sex during the 2012 Olympics has been sentenced to 30 years in a U.S. prison, in a case of human trafficking that draws attention during international sporting events.

Jason Gandy was stopped in July 2012 by immigration officers in Britain who suspected something was wrong with the adult man traveling with an unrelated 15-year-old boy, U.S. Immigration and Customs Enforcement said.

He was convicted of sex trafficking of minors in July and sentenced this week by U.S. District Judge Lee Rosenthal who told him: “You are evil, and most evil are those who willingly exploit others for their own gratification.”

Along with the incident at the London Olympics, there were reports of Nigerians taken to Russia for sex during the World Cup this past summer and, in the United States, football’s Super Bowl also draws concerns over trafficking.

However experts are split on whether such spectacles actively fuel trafficking. Many say the commercial sex market grows during any number of large events and caution that such concern draws attention away from what is a year-round crime.

Some 1.5 million people in the United States are estimated to be victims of trafficking, mostly for sexual exploitation. The majority are children, according to a U.S. Senate report published last year.

Globally, nearly 21 million people are victims of human trafficking, a $150 billion industry, according to the United Nation’s International Labour Organization.

Of that total, an estimated 4.5 million people are forced into sex work, and children are estimated to comprise 5.5 million of the overall victims, according to the ILO.

In Gandy’s case, the man paid for the boy’s airfare and passport, U.S. officials said.

He planned to make the boy perform massages and sex acts with customers, taking advantage of the crowds gathered for the Olympics, they said.

He also molested the boy himself, they said.

Men who survived Gandy’s molestation testified at his sentencing about their ordeals being enslaved at a massage operation Gandy ran out of his home in Houston, prosecutors said.
http://news.trust.org/item/20181219193057-d1lsq