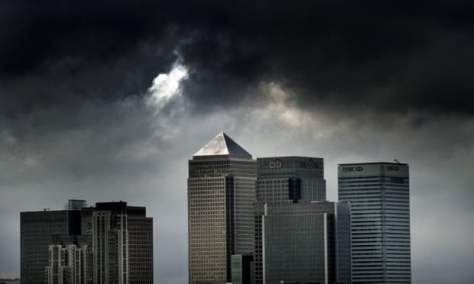 Crisis prevention is incomplete more than a decade on from the financial crisis, the IMF’s deputy head, David Lipton, said. Photograph: Eddie Mulholland/Rex

The storm clouds of the next global financial crisis are gathering despite the world financial system being unprepared for another downturn, the deputy head of the International Monetary Fund has warned.

David Lipton, the first deputy managing director of the IMF, said that “crisis prevention is incomplete” more than a decade on from the last meltdown in the global banking system.

“As we have put it, ‘fix the roof while the sun shines’. But, like many of you, I see storm clouds building and fear the work on crisis prevention is incomplete.”

Lipton said individual nation states alone would lack the firepower to combat the next recession, while calling on governments to work together to tackle the issues that could spark another crash.

“We ought to be concerned about the potency of monetary policy,” he said of the ability of the US Federal Reserve and other central banks to cut interest rates to boost the economy in the event of another downturn, while also warning that high levels of borrowing by governments constrained their scope for cutting taxes and raising spending.

Lipton said the IMF went into the last crash under-resourced before it was handed a war chest worth $1tn (£790bn) from governments around the world, while adding that it was important that national leaders had agreed to complete a review of the fund’s financial firepower next year.

“One lesson from that crisis was the IMF went into it under-resourced; we should try to avoid that next time.”

Speaking to an audience at Bloomberg in London, Christine Lagarde’s deputy called on China to take urgent steps to open up its economy to global competition.

Against a backdrop of Donald Trump engaging in a bitter trade dispute with Beijing, he said China needed to lower trade barriers, while also impose tougher rules to protect intellectual property – a key complaint of the US president.

Lipton suggested that Chinese trade policies that were once considered acceptable when it joined the World Trade Organization in 2001 as a $1tn economy may now be inappropriate as it had become a $16tn international superpower.

However, he did warn that the US should not take an overly heavy-handed approach to reform, adding: “China has many reforms that it could carry out that would be in its own interest and in the interest of countries around the globe. But China feels they can’t take those steps, as they put it, with a gun to their head, in the midst of trade tensions.”

The warning from the IMF marked the latest intervention from the Washington-based fund as the outlook for the global economy deteriorates, with particular flashpoints being the US-China trade dispute and central banks raising interest rates.

Global growth is forecast to slow as a result of the trade war, while financial markets have also been rattled in recent weeks. The FTSE 100 recorded its worst day since the Brexit vote last week, prompted by fears over the dispute, wiping more than £56bn off the value of the UK’s leading companies.

After almost a decade of low interest rates, the total value of global debt, both public and private, has risen by 60% to hit a record high of $182tn, so if central banks raise borrowing costs that would create difficulties for businesses and governments.

Lipton warned that sustained trade conflict between the US and China would be likely to trigger “far-reaching and long-lasting consequences” for the global economy, with a risk that Trump’s rhetoric could encourage China to shift its economy away from the rest of the world.

“Trade barriers if they are sustained could lead to a fragmentation of the global economy.”

“If this [trade dispute] leads to stalemate, China may decide to reorientate its economy not to trade with the US. To accept sustained trade barriers … could lead to a slowdown [for the global economy],” he said.
https://www.theguardian.com/business/2018/dec/11/imf-financial-crisis-david-lipton