UN warns that famine could overwhelm country in next three months, with 13 million people at risk of starvation 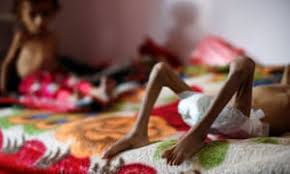 Yemen could be facing the worst famine in 100 years if airstrikes by the Saudi-led coalition are not halted, the UN has warned.

If war continues, famine could engulf the country in the next three months, with 12 to 13 million civilians at risk of starvation, according to Lise Grande, the agency’s humanitarian coordinator for Yemen.

She told the BBC: “I think many of us felt as we went into the 21st century that it was unthinkable that we could see a famine like we saw in Ethiopia, that we saw in Bengal, that we saw in parts of the Soviet Union – that was just unacceptable. “Many of us had the confidence that would never happen again and yet the reality is that in Yemen that is precisely what we are looking at.”

Yemen has been in the grip of a bloody civil war for three years after Houthi rebels, backed by Iran, seized much of the country, including the capital, Sana’a. The Saudi-led coalition has been fighting the rebels since 2015 in support of the internationally recognised government.

Thousands of civilians have been caught in the middle, trapped by minefields and barrages of mortars and airstrikes. The resulting humanitarian catastrophe has seen at least 10,000 people killed and millions displaced.

Speaking on Sunday evening, Grande said: “There’s no question we should be ashamed, and we should, every day that we wake up, renew our commitment to do everything possible to help the people that are suffering and end the conflict.”

Her comments came after the UN and humanitarian workers condemned an airstrike in which the Saudi-led coalition targeted Yemen’s Shia rebels, killing at least 15 people near the port city of Hodeidah.

Video footage released by the rebels showed the remains of a mangled minibus littered with groceries following the attack on Saturday, which left 20 others injured.
The Houthi rebels reported that five members of the same family were among those killed, adding that many children were among the casualties.

“The United Nations agencies working in Yemen unequivocally condemn the attack on civilians and extend our deepest condolences to the families of the victims,” said Grande.
She added: “Under international humanitarian law, parties to the conflict are obliged to respect the principles of precaution, proportionality and distinction. Belligerents must do everything possible to protect civilians not hurt, maim, injure or kill them.”

Hodeidah, with its key port installations that bring in UN and other humanitarian aid, has become the centre of Yemen’s conflict, with ground troops allied to the coalition struggling to drive out the rebels controlling it.

The killing and maiming of civilians including many children in the Red Sea city of has soared in the last three months according to aid workers.

Since June more than 170 people have been killed and at least 1,700 have been injured in Hodeidah province, with more than 425,000 people forced to flee their homes.
A Gulf coalition led by Saudi Arabia and the United Arab Emirates has been trying to wrestle back control of the strategic port city.

If the array of Yemeni militias takes the city it would be their biggest victory against the rebels, although the battle on the Red Sea coast also threatens to throw Yemen into outright famine.

Last month Save the Children warned the fighting was turning into a “war on children” with thousands suffering life-changing injuries in the attacks.

On a visit to Yemen the charity’s CEO, Helle Thorning-Schmidt, warned attacks on schools and hospitals were on the rise, with children on the frontline of violence and medics unable to cope with the influx of the wounded.

Meanwhile the country’s currency has collapsed and food prices have doubled in the last month, fueling the threat of famine.