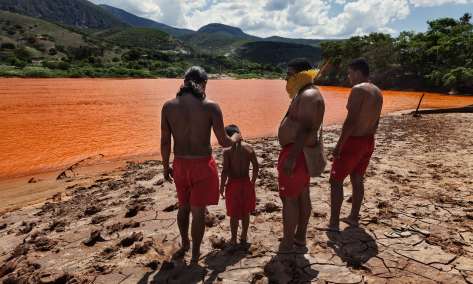 Six months before a dam containing millions of litres of mining waste collapsed, killing 19 people in Brazil’s worst environmental disaster, the company operating the mine accurately predicted the potential impact of such a disaster in a worst-case risk assessment.

But federal prosecutors claim the company – a joint venture between the Brazilian mining giant Vale and the Anglo-Australian multinational BHP Billiton – failed to take actions that they say could have prevented the disaster. The prosecutors instead claim the company focused on cutting costs and increasing production.

“They prioritized profits and left safety in second place,” said José Adércio Sampaio, coordinator of a taskforce of federal prosecutors, summarising the criminal case against the joint venture and its parent companies.”

When the Fundão tailings dam failed on 5 November 2015, it unleashed about 40m litres of water and sediment from iron ore extraction in a wave that polluted the water supply for hundreds of thousands of people, decimated wildlife and spewed a rust-red plume of mud down the Doce river.

Yet more than two years later, nobody has accepted responsibility.

Previously unreported internal documents from the joint venture Samarco show that six months before the collapse, the company carried out a worst-case assessment of the dam, near Mariana in Minas Gerais state.

The document – one of hundreds submitted to the court by prosecutors – warned that a maximum possible loss from a “liquification break” could mean up to 20 deaths, cause serious impacts to land, water resources and biodiversity over 20 years, and cost $3.4bn.

The prosecutors’ complaint also includes harrowing accounts by survivors from Bento Rodrigues, a small community obliterated by the mud released in the disaster.

Wesley Izabel managed to save his two-year-old son, Nicolas, but his daughter, Emanuelle, five, slipped from his fingers to her death.

When the mud engulfed her house, Darcy Santos heard her grandson Thiago, seven, cry “help me, Jesus!” before he was suffocated.

Until the disaster, Samarco was a Brazilian success story. In 2014, despite falling international iron prices, it declared a net profit of $1.3bn.

But prosecutors allege that its directors encouraged the company to keep cutting costs.

Read this article from The Guardian Online edition.