I was privileged to have participated in a two-day conference on women and migration in Africa, held in Nairobi, Kenya, from 6-8 June. The conference was sponsored by six Catholic Religious Congregations, accredited as non-governmental organizations to the United Nations. Over 90 participants from about 10 African countries attended the conference. Some of the participants were currently engaged in work with migrants, some were migrants, while others were interested in learning more about migration issues. Seven Sisters of Notre Dame de Namur from Kenya, Congo-Kinshasa and Zimbabwe/South Africa provinces participated in the conference. Sister Joan Burke, SNDdeN (Kenya) was among the local organizing team. I personally found this conference both informative and challenging.

We had input from representatives from the United Nations High Commissioner for Refugees, International Organization for Migration, Kenyan Government, Kenyan Bishop Conference, and other organizations and individuals (including refugees and migrants). It was moving to hear from refugees who are now volunteers. I was also very impressed to hear the delegate from the Kenyan Government commend the efforts of Catholic Religious women and men in providing services to migrants and refugees, and their work against human trafficking. He expressed the interest of the government collaborating with them in future. 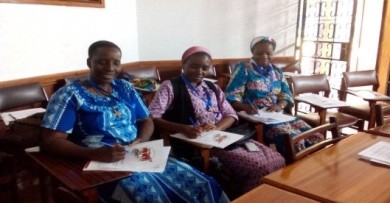 Input from the different presenters stimulated discussions among participants on issues such as providing adequate protection to migrants and refugees, victims of human trafficking, as well as addressing some of those factors that force people to migrate. During the conference, we went into working groups and worked on different topics for example: environment and migration, migration and public health, human trafficking, and advocacy. I joined 24 other participants to form a group centered on “Countering Trafficking in Person.” The group came up with a 7-Point Action Plan through which we were challenged to continue to work on, within our networks, as we return to our respective countries or regions.