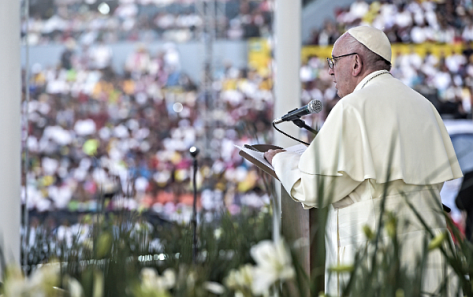 EL PASO — Pope Francis’ Feb. 12-17 swing through Mexico reaches a crescendo on Wednesday in Ciudad Juárez, just across the US border from El Paso. So far history’s first Latin American pontiff has been a sensation, drawing rapturous crowds and saturation media coverage.

In the United States, Wednesday’s border stop is likely to be viewed through the prism of the politics of 2016 and debates over immigration reform, but Mexicans value the gesture for another reason, too: Ciudad Juárez is also associated with their country’s epidemic of gang- and drug-related violence.

In 2010 and 2011, homicidal mayhem drove an estimated 100,000 people across the border into El Paso and neighboring Las Cruces, New Mexico, many of whom remain out of fear. For those folks, Francis is coming not merely as a champion of migrants, but also, as he put it in advance, an “instrument of peace.”

Here’s one sign: The normal free-wheeling and extemporaneous Francis has stuck fairly closely to his scripts, a sign of his personal commitment to crafting them.

In some ways, this is the biggest papal initiative of early 2016, and so it’s worth taking stock of what we’ve learned. As the Mexico trip nears its end, here are three thoughts about its big-picture significance.

It’s a well-established principle of Vaticanology that popes often say more with their gestures than with their words. Rarely, however, has a single papal trip been more eloquent than Francis’ Mexico outing.

It began with a stop to meet the Russian Orthodox patriarch in Havana, a venue with strategic significance in two senses: It came off as a sign of graciousness for the Russians, who still see Cuba as a home-court advantage, and it also reframed the Catholic/Orthodox relationship by momentarily freeing it from the weight of European history.

Upon arriving in Mexico, Francis clearly wanted to make four statements, and he underscored each with a symbolically fitting destination:

•    The importance of popular faith and devotion, which he highlighted Saturday with a Mass in the Basilica of Our Lady of Guadalupe.

•    The dignity of Latin America’s indigenous population, expressed on Monday by an outing to Chiapas, home to an armed Zapatista uprising fueled in part by a legacy of injustices directed at indigenous communities.

•    The indecency of the drug trade and drug-related violence, hammered home on Tuesday when the pontiff traveled to Morelia, a state in which scores of ordinary people and an estimated 40 Catholic priests have been killed by criminal gangs in the past decade.

•    The human dignity of immigrants, captured in the border stop on Wednesday.
Aides said Francis personally chose these destinations, and it’s hard to imagine an itinerary better reflecting his priorities. When the pope goes some place, a good chunk of the world’s media also travels with him, and it’s clear Francis wanted to exploit that spotlight.

As I’ve said before, if you want to know what’s on this pope’s mind, you don’t need his spokesmen or spin doctors — just ask his travel agent.

When popes travel, they generally include a speech to the country’s bishops, which is a chance to translate their vision for the Church into practical terms for that country.

Francis met the Mexican bishops during Lent, so there’s nothing unusual about the fact that he invited an examination of conscience. Many observers, however, heard a fairly unmistakable rebuke in the pope’s remarks, including his warning against “underhanded agreements” and his insistence that the Church “does not need darkness to carry out her work.”

It did not escape attention, for instance, that when Francis was leading public events in the capital on Saturday and Sunday, his exchanges with Cardinal Norberto Rivera Carrera of Mexico City, associated by many locals with an old-school preference for circles of wealth and power, seemed strained and awkward.

The pontiff indirectly confirmed the point on Monday in Chiapas, paying a private visit to the tomb of the late Bishop Samuel Ruiz — a progressive and friend of the liberation theology movement, who had a distinctly ambivalent relationship with Rivera.

In effect, what the Mexico trip underlined was the kind of bishop Francis wants. Key qualities include:
•    A preference for ordinary people and the poor rather than elites.
•    Close contact with social realities, including concrete humanitarian and charitable efforts.
•    Political moderation and dialogue with all parties.
•    Simplicity of lifestyle and approach.
•    Personal integrity and a distaste for wheeling and dealing.
•    Rejection of careerism; that is, a prelate who thinks more about this job than the next one.
Just as it’s become common to refer to “John Paul II/Benedict bishops,” meaning prelates named by one of those two popes who reflect their outlook and ecclesiastical style, the next generation will likely come to know those who share the qualities above as “Francis bishops.”

Year of the immigrant

Especially with the stop at the border, the Mexico trip confirms that while 2015 was the “Year of the Environment” in terms of Francis’ social agenda, with his eco-encyclical Laudato Si’ and his advocacy around the UN climate change summit in Paris, 2016 shapes up as the “Year of the Immigrant.”

The pontiff had already made that clear in his Jan. 11 speech to the diplomatic corps accredited to the Vatican, generally considered a pope’s most important foreign address of the year.

Francis devoted his 4,000-word speech in large part to a plea for “accepting and accommodating” new arrivals, especially in the context of the current European crisis. (More than a million refugees and migrants turned up on the continent in 2015, mostly by sea, with the violence in Syria the biggest force that drove the exodus.)

He also referred to immigration challenges in the United States, and by traveling to the border on Wednesday, he puts an exclamation point on the message. In his speech to the Mexican bishops on Saturday, he applauded their efforts for migrants and urged them to do even more — including closer coordination with their fellow prelates in the United States.

The pontiff will have a chance to return to the theme in July, when he travels to Poland for the Catholic Church’s World Youth Day. Poland’s right-wing government has only grudgingly agreed to meet its obligations under an EU refugee relocation scheme, and has vowed to pursue tougher immigration standards.

Can Francis make a difference?

Perhaps not, as it doesn’t seem the stars are aligned for immigration reform in the United States in 2016, and across Europe, far-right xenophobic movements are feeling the wind at their backs.

On the other hand, Francis has a track record for pulling political rabbits out of his hat. If he notches a breakthrough in 2016, his Mexico trip will be recalled as the moment when he found an especially dramatic way to state the case.