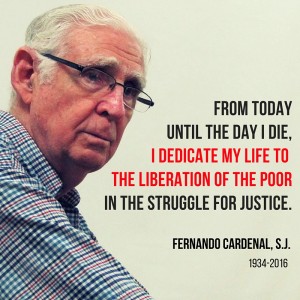 Fr. Cardenal, born in 1934 in Granada, Nicaragua, led of life of advocacy and active commitment to the poor that emulated the Jesuit approach to injustice throughout the Americas since the Second Vatican Council.

His lifelong commitment to the poor and the oppressed began as a young Jesuit living among the poor in Medellín, Colombia, and has lasted throughout his Jesuit life. Despite repeated requests from Rome that he refrain for political activity and advocacy, he remained engaged in the Nicaraguan revolution against the Somoza dictatorship during the 1970’s and 1980’s. In the years following the revolution, Fr. Cardenal lead the Nicaraguan Literacy Campaign and served as the country’s Minister of Education (1984-1990).

As a consequence of his commitment to live in solidarity with the poor and his refusal to abandon his work, Fr. Cardenal was dismissed from the Jesuits in 1984 only to be reinstated 1997. During this time he continued to live in a Jesuit community but was not a member of the Society of Jesus. Cardenal went on to serve as the director of the Fe y Alegria schools networkin Nicaragua, a Jesuit network of schools for the most economically poor throughout Latin America, as well as regular speaking to groups in Nicaragua as well as internationally.

Orbis Books recently published a Faith and Joy, written by Fr. Cardenal as well as Kathy McBride and Mark Lester, long-time friends of Fr. Cardenal who work for Augsburg College’s Center for Global Education, and are based in Nicaragua.

The UCA Nicaragua has asked that gifts in his honor of Fr. Cardenal be made in support of the Fe y Alegria Schools in Nicaragua. Donations in the U.S. can be made via Friends of Fe y Alegria / MAGIS America by selecting “General Fund for Nicaragua.”

The following video recording was produced by John Carroll University, where Fr. Cardenal visited in 2014 and shared his story of working for justice with students and faculty: Fernando Cardenal 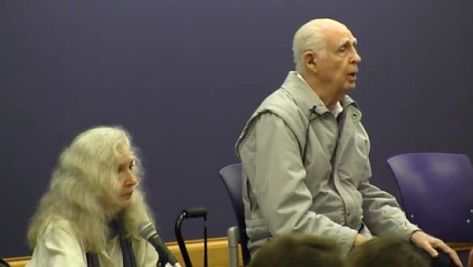