Pope Francis has released a video asking people of the world to unite with him in prayer for the care of creation. 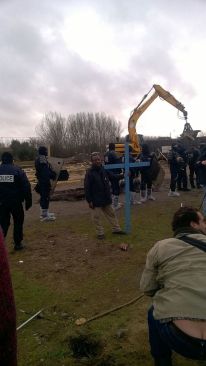 Christians for Calais strongly denounces the sudden destruction of a mosque and church in the Calais ‘Jungle’ refugee camp.

Prefecture representatives were recorded and witnessed, including by NGO and charity leaders, as stating that they would not bulldoze churches or mosques. This was double checked, as the protestant church and a mosque were within the 100 meter eviction zone announced and then enforced by the authorities. It was reconfirmed verbally that churches and mosques would not be removed, and this was initially upheld as those structures were indeed left untouched when the buffer zone was created on Monday 18 January.

However, on Monday morning 1 February, without warning, bulldozers arrived and destroyed these houses of worship. No communication regarding this was received by any party, including the NGOs and charities in charge of the camp or those who owned the structures and materials. END_OF_DOCUMENT_TOKEN_TO_BE_REPLACED

For seven years, I have lived in the Dzaleka Refugee Camp in Malawi, a country in the southeastern part of Africa. I survive like any other refugee, struggling to meet the basic needs of my family. I receive a monthly food ration that we get from the World Food Program, a monthly stipend of 25,000 MK (something around 40 US dollars), and 20 kg of rice from my job. However, the psychological wounds from my experience in my home country, the Democratic Republic of Congo (DRC), far outweigh the financial difficulties my family and I face in the camp.

My story begins in June 2008, in North-Kivu where my wife and I worked as health professionals. I treated six soldiers, all of whom had severe gunshot wounds, before they were transferred to the main hospital in Goma city. A day later, another group of soldiers came to the clinic to ask me about the six soldiers I treated. They told me that the wounded soldiers were rebels fighting on the side of Laurent Nkunda, who they claim led a rebellion that fought against the governmental military force. Saying that the men I had treated were in violation of the peace agreement, the government soldiers accused me of working on the side of the rebellion. END_OF_DOCUMENT_TOKEN_TO_BE_REPLACED

WASHINGTON — The Department of Health and Human Services placed more than a dozen immigrant children in the custody of human traffickers after it failed to conduct background checks of caregivers, according to a Senate report released on Thursday.

Examining how the federal agency processes minors who arrive at the border without a guardian, lawmakers said they found that it had not followed basic practices of child welfare agencies, like making home visits. END_OF_DOCUMENT_TOKEN_TO_BE_REPLACED