As foundations and wealthy individuals funnel money into global development, what “solutions” are they pursuing? 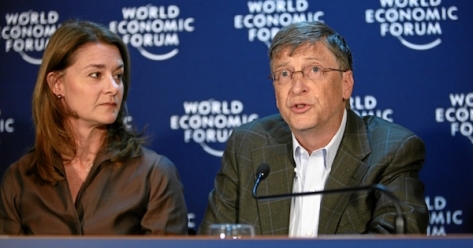 From Warren Buffett to Bill Gates, it is no secret that the ultra-rich philanthropist class has an over-sized influence in shaping global politics and policies.

And a study (pdf) just out from the Global Policy Forum, an international watchdog group, makes the case that powerful philanthropic foundations—under the control of wealthy individuals—are actively undermining governments and inappropriately setting the agenda for international bodies like the United Nations.

The top 27 largest foundations together possess assets of over $360 billion, notes the study, authored by Jens Martens and Karolin Seitz. Nineteen of those foundations are based in the United States and, across the board, they are expanding their influence over the global south. And in so doing, they are undermining democracy and local sovereignty.

Notably, foundation spending on global development is skyrocketing, jumping from $3 billion per year over a decade ago to $10 billion today. The Bill and Melinda Gates Foundation leads the way, giving $2.6 billion in 2012, the report notes. In addition, the Gates Foundation is the largest non-state funder of the World Health Organization.

Meanwhile, many of the wealthiest people on the planet are individually jumping into the fray, with 137 billionaires from 14 countries last year pledging large sums to philanthropy. Some among them, like former New York Mayor Michael Bloomberg and Facebook CEO Mark Zuckerberg, have been criticized for abusing their power and influence in pursuit of questionable policies.

“If these and more ultra rich fulfill their pledges, many billions of dollars will be made available for charitable purposes,” the authors argue. “It must be noted, however, that the increase in philanthropic giving is just the other side of the coin of growing inequality between rich and poor.”

As political scientist Gary Olson argued Friday in Common Dreams, “Just to be clear, some Big Philanthropists have done some good work. However, as Peter Buffet (Warren Buffet’s son) has argued, philanthropy is largely about letting billionaires feel better about themselves, a form of ‘conscience laundering’ that simultaneously functions to ‘keep the existing system of inequality in place…’ by shaping the culture.

What’s more, the report warns, “The influence of large foundations in shaping the global development agenda, including health, food, nutrition, and agriculture…raises a number of concerns in terms of how it is affecting governments and the UN development system.”

The risks of “philanthrocapitalism” are manifold, the researchers argue, including: “fragmentation and weakening of global governance”; “unstable financing”; and “lack of monitoring and accountability mechanisms.”

“What is the impact of framing the problems and defining development solutions by applying the business logic of profit-making institutions to philanthropic activities, for instance by results-based management or the focus on technological quick-win solutions in the sectors of health and agriculture?” the report poses.

A close look at the forces at work within the groups controlling the cash flow reveals numerous causes for concern.

“Through their multiple channels of influence, the Rockefeller and Gates foundations have been very successful in promoting their market-based and bio-medical approaches towards global health challenges in the research and health policy community—and beyond,” the authors state.

Moreover, the report continues, “there is a revolving door between the Gates Foundation and pharmaceutical corporations. Many of the Foundation’s staff had held positions at pharmaceutical companies such as Merck, GSK, Novartis,  Bayer HealthCare Services and Sanofi Pasteur.”

Looking at agriculture and farming, meanwhile, the Gates Foundation is undermining self-determination and local solutions in measurable ways.

“The vast majority of the Gates Foundation’s agricultural development grants focus on Africa,” the report notes. “However, over 80 percent of the U.S. $669 million to NGOs went to organizations based in the U.S. and Europe, with only 4 percent going to Africa-based NGOs. Similarly, of the U.S. $678 million grants to universities and research centers, 79 percent went to grantees in the U.S. and Europe and only 12 percent to recipients in Africa.”

Both the Gates and Rockefeller Foundations have been slammed by international grassroots groups, including the global peasant movement La Via Campesina, for their international role in exporting big agricultural models, privatizing food policies, and expanding the power of companies like Monsanto.