An environmental activist was killed last Monday in Yagen, a village on the Marañon River in northern Peru, in the province of Celendín, Cajamarca. 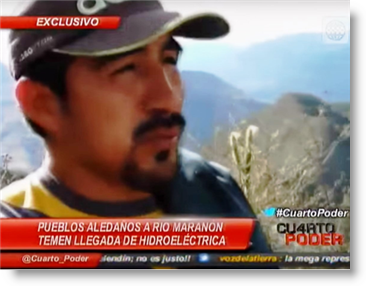 Hitler Rojas, 34, a leading activist in the protest against a hydroelectric project, was shot five times by unknown assailants when he was walking towards his home.

President of the rural self-defense groups (rondas campesinas) in the area and recently elected mayor of Yagen, Rojas was one of the leaders in the area’s defense front against the building of the Chadin II hydroelectric plant, a huge project to be executed by Odebrecht of Brazil that will require the displacement of 1,000 residents from the area and the flooding of 32 square kilometers of villages and farmland along the river.  The area to be flooded is 10 times the size of New York’s Central Park, or three times the size of Lima’s San Isidro district.

Rojas opposed the project since it was first approved, along with some 19 other hydro projects along the Marañon River, during Alan Garcia’s administration in 2010.  Both he and other leaders led protests against Odebrecht and at one point kidnapped several of the company’s workers to highlight their demands.

The environmental impact study for this specific project was approved by the Ollanta government in 2011. The project, which would provide 10% of the country’s electrical power supply, is currently on standby because of local opposition in the Cajamarca and Amazonas regions.

In its statement warning against an escalation of violence in the Marañon issue, the national Human Rights Coordinator noted that the People’s Ombudsman report in November highlighted the social conflict created by the Chadin II project, not only because of the widespread opposition against its negative social and environmental impact but also because the government has so far not carried out the required prior consultation  with the local inhabitants.

Elmer Saldaña, president of Yagen’s defense front, said the authorities did not regard the local population with the same importance as the project developers. “When we detained the Odebrecht workers, three district attorneys and 40 police arrived immediately, and now that our companion dies… the attorney didn’t arrive on time to remove the body.”

Rojas’ death is the latest related to environmental issues. In mid-November, Alfredo Vracko was shot dead in southeastern Madre de Dios — the timber and forestry investor constantly filed claims against illegal miners who were invading his property along the InterOceanic Highway, and are destroying large swathes of the rainforest and encroaching on the Manu National Park.  In September 2014, Edwin Chota and three other leaders from the Ashaninka indigenous community were murdered for protesting against illegal loggers in the Ucayali region bordering on Brazil.