Victims as young as 4 years old 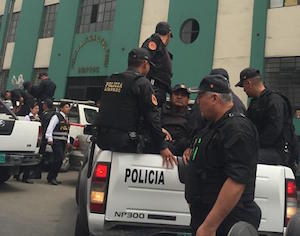 LIMA, Peru – An international law enforcement operation culminated Saturday with the arrests of six individuals involved in sex trafficking and the rescue of 36 sex trafficking victims, including 11 minors.

Five of those arrested are Peruvian citizens. They face charges for human trafficking of minors, pimping and pandering. The remaining individual, Joshua David Brown, a U.S. citizen, is alleged to have facilitated sex tourism and exploitation of children. He faces criminal charges in Peru, and if convicted, faces at least 25 years imprisonment. Brown may also face criminal charges in the United States under the Protect Act.

The rescued victims are all Peruvian and one is as young as 4 years old. According to Peruvian law enforcement, the 4 year old was being offered for $7,000 in U.S. currency. All the rescued minors are in the care of Peruvian child welfare services.

The Peruvian Attorney General’s Office is handling the prosecution of the case. If convicted, the defendants face up to 25 years imprisonment.

Andean region Attaché Luis Sierra said, “We commend the government of Peru and the PNP for their swift action in bringing this case to fruition. The children and adults rescued as part of this case lived a horrible nightmare at the hands of these monsters. Our message is clear: if you’re abusing the innocent, we will not rest until you’re found and put behind bars.”

This investigation was conducted under HSI’s Operation Predator, an international initiative to protect children from sexual predators. Since the launch of Operation Predator in 2003, HSI has arrested more than 12,000 individuals for crimes against children, including the production and distribution of online child pornography, traveling overseas for sex with minors, and sex trafficking of children. In fiscal year 2014, more than 2,300 individuals were arrested by HSI special agents under this initiative and more than 1,000 victims identified or rescued.

HSI encourages the public to report suspected child predators and any suspicious activity through its toll-free Tip Line at 1-866-DHS-2-ICE or by completing its online tip form. Both are staffed around the clock by investigators. From outside the U.S. and Canada, callers should dial 802-872-6199. Hearing impaired users can call TTY 802-872-6196. Suspected child sexual exploitation or missing children may be reported to the National Center for Missing & Exploited Children, an Operation Predator partner, via its toll-free 24-hour hotline, 1-800-THE-LOST.