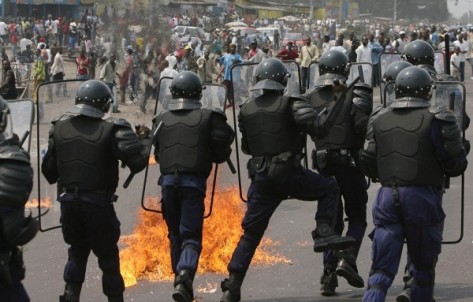 KINSHASA – Police in the capital of Democratic Republic of Congo fired teargas on Wednesday to disperse stone-throwing students whose protest against a feared increase in school fees is the latest sign of unrest ahead of a tense election season.
Witnesses said the protest outside the Superior Institute for Architecture and Urbanism was the second by students in Kinshasa this week. It comes ahead of an election set for November 2016, when President Joseph Kabila is due to step down.

Students staged some of the largest protests in January against a plan to revise Congo’s election code that critics said was a ploy to keep Kabila in power beyond his mandate. About 40 people died in clashes when security forces opened fire.

Students told Reuters on Wednesday they were protesting against an increase in annual tuition fees at state universities from $320 to $435, which they said was reflected on registration forms they had received. The government has denied it is raising tuition fees.

The students said they had tried to discuss the issue with the university director but had been chased away by police. Up to 1,000 students later blocked the main road and threw rocks at dozens of police officers before being dispersed by teargas.

“We wanted to demonstrate to attract the attention of the authorities,” said one student who asked not to be named.

“The police fired on us with teargas and live fire. Is this how (Kabila) plans on staying in power after 2016?”

The charge of live fire could not be independently confirmed and was denied by government spokesman Lambert Mende, who said the police had intervened with teargas to free up traffic.

A Reuters witness saw two students being led away by police. Police said a few officers had been injured by the rock-throwing. Students said at least one protester was slightly hurt.

The Reuters witness saw a roughly half-kilometre stretch of road littered with rocks and teargas canisters as well as windows shattered by rocks.
Critics accuse Kabila, in power since 2001, of seeking to violate the constitution by delaying the presidential election. His spokesman has said he will respect the constitution.