(Lucy Bullivant is the editor-in-chief of the webzine Urbanista.org.) 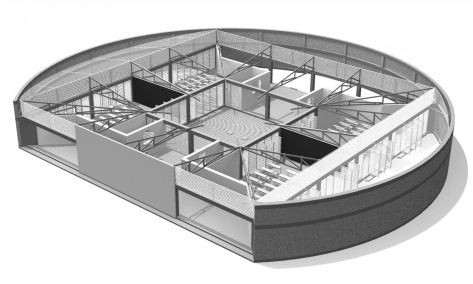 A new school in Kenya’s central highlands harvests rain for pupils, teachers and their families, but can the project be repeated in other arid regions?

But the opening of a school in rural Laikipia in the central highlands will hopefully break that vicious cycle for 300 children, their teachers and the wider community. More than just a simple building, the Waterbank School is a living infrastructure that harvests rainwater – 360,000 litres over the course of two rainy seasons – as well as being an education centre. 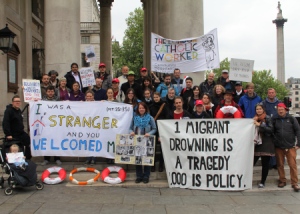 More than 40 international religious peace activists highlighted the deaths of migrants and refugees in the Mediterranean and the culpability of the UK government on Friday. The gathering consisted of a silent procession to the Foreign and Commonwealth Office, a public prayer vigil, and a symbolic representation of the deaths at the Home Office.

Since January 1, 2015 over 65,000 refugees and migrants have crossed the Mediterranean into Europe. So far this year at least 1,800 men, women and children have drowned in their bid to reach Europe; a direct result of the indefensible decision to disband Mare Nostrum, the search and rescue operation. These include refugees fleeing oppression, poverty and war, forced to submit to acts of desperation and the risks of human trafficking in their search for a better life.

In the face of this crisis, European governments, including the UK, have reduced search and rescue operations leading to the death toll increasing ten times that of the same period in 2014 (according to the International Organisation for Migration).

THE GUARDIAN
by Joseph Stiglitz

The US and the world are engaged in a great debate about new trade agreements. Such pacts used to be called free-trade agreements; in fact, they were managed trade agreements, tailored to corporate interests, largely in the US and the EU. Today, such deals are more often referred to as partnerships, as in the Trans-Pacific Partnership (TPP). But they are not partnerships of equals: the US effectively dictates the terms. Fortunately, America’s “partners” are becoming increasingly resistant.

It is not hard to see why. These agreements go well beyond trade, governing investment and intellectual property as well, imposing fundamental changes to countries’ legal, judicial, and regulatory frameworks, without input or accountability through democratic institutions.

Perhaps the most invidious – and most dishonest – part of such agreements concerns investor protection. Of course, investors have to be protected against rogue governments seizing their property. But… More…

Thousands of people have protested in Okinawa against a controversial US marine airbase in the southern Japanese island, as a two-decade-long row over the relocation of the site deepens.

The massive demonstrations on Sunday aimed to pressure Tokyo to halt building work for the military base that has continued despite vehement opposition from the local government in Okinawa.

Okinawa is home to more than half of the 47,000 US service personnel stationed in Japan as part of a defence alliance, a proportion many of the island’s residents say is too high.

Washington announced plans to move the Futenma airbase in 1996, hoping to ease tensions with the host community after the gang-rape of a schoolgirl by servicemen.

But locals have pushed to block the relocation of the base within the island, insisting the facility should be fully removed instead. The demonstrations have soured relations between Tokyo and Okinawa – a once independent kingdom that was annexed by Japan in the 19th century. More… 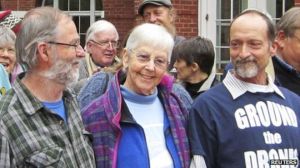 A US federal appeals court has ordered the immediate release of three anti-nuclear activists, including an elderly Catholic nun, the group’s lawyer says.

Attorney Bill Quigley says he hopes they will be released within days.

Last week, sabotage convictions against Sister Megan Rice, 85, Michael Walli, 66, and Greg Boertje-Obed, 59, for breaking into a Tennessee nuclear facility in 2012 were overturned.

But it upheld guilty verdicts for damaging government property.

The other two protesters were each sentenced to more than five years in prison.