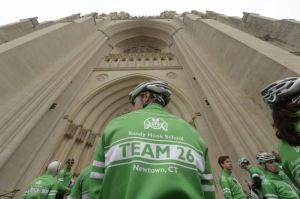 On March 31st, the Team 26 Cyclists from Newtown, CT will be arriving at the Capitol around 2pm for a final press conference after their long journey. They began their ride Saturday in Connecticut and traveled through 5 states over four days to raise awareness and remember victims of gun violence.

The team consists of professional and top amateur and masters cyclists from the Northeast. Its members include multiple medalists, several residents of Newtown, and two riders who have children who went to Sandy Hook School. They all care deeply about our children and seek reasonable gun violence prevention legislation.

In a speech given last year, team member Monte Frank said they ride “carrying the pain and tears of moms and dads, brothers and sisters of gun violence victims.” They will ride from Sandy Hook to the Capitol again this year in support of common sense legislation to reduce gun violence and to honor all of the victims of gun violence.

According to their Facebook page, the measures they support to help curb gun violence are:

* “Finish the job” and require a background check on all gun sales;
* Limit magazines to 10 rounds;
* making gun trafficking a federal crime, including real penalties for “straw buyers”; and
* providing protection when temporary restraining orders are issued in domestic violence cases;

FAN supports and encourages the Sandy Hook Ride on Washington. Be sure to watch their Facebook page for updates on the progress.