Aljazeera
Voters brave sun, insecurity and queues but presidential election extended to Sunday in some areas after tech glitches. 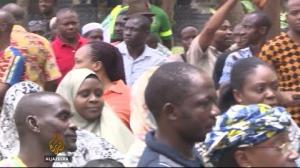 Nigerians turned out en mass on Saturday to vote in what is expected to be one of the tightest presidential races in their history between incumbent Goodluck Jonathan and former military ruler Muhammadu Buhari.

But it is possible he could lose to Buhari, who has contested three previous elections but never come close to victory before.

Most Nigerians expect a tight race. Insiders on both sides say that they are confident of victory, and a January poll by Afro-barometer put the parties neck and neck with 42 percent of the vote each.

Buhari’s opposition coalition, the All Progressives Congress (APC), has quickly gained popularity by presenting itself as the face of change for voters who have grown frustrated by the government’s record on corruption and its inability to defeat a dogged insurgency waged by the Boko Haram group.

And fighters from Boko Haram, who were the cause of a six-week delay to the poll, waved guns and forced voters to abandon polling stations in three villages of northeast Gombe state, witnesses told the Associated Press news agency.

But, despite these incidents, voting in the huge nation was largely peaceful and good-nature into the early evening.

The official website of the Independent National Electoral Commission was hacked but was quickly secured, said officials who said the site holds no sensitive material..

“Struck by Nigerian Cyber Army!” was the message left at http://www.inecnigeria.com .

Technical problems also plagued a new system for reading voting cards with biometric card-reading machines, prompting the electoral commission to promise an extra day of voting for some polling stations.

Even the president was affected. Three newly-imported card readers failed to recognize the fingerprints of Jonathan and his wife. He returned two hours later and was accredited without the machine using visual identification.

Biometric cards are being used for the first time to discourage the kind of fraud that has marred previous votes.

Afterward, Jonathan wiped sweat from his brow and urged people to be patient as he had, telling Channels TV: “I appeal to all Nigerians to be patient no matter the pains it takes as long as if, as a nation, we can conduct free and fair elections that the whole world will accept.”

Jonathan cast his ballot later in the day.

Many frustrated voters told Al Jazeera of problems with the machines
“We have had 100% failure reading fingerprints”, Kofar Fada, an INEC worker in the rural Rano local government area of Kano, a state in Nigeria’s predominantly Muslim north, said.

Outside the door, increasingly frustrated women jostled for their place at the front of the queue.

“I have been here sinc‎e 8,” Zainab Sabo said, as she waited among them in the heat. “I’m tired and I’m hungry.”

Profiles: Who are Goodluck Jonathan and  Muhammadu Buhari?
But many others at polling stations across the country took the delays and technical problems in good spirits, one line of voters even bursting into song as they waited to cast their ballots.

“I am ready to cast my vote at whatever cost,” said Tandalami Balami, who fled the town of Gwoza, recently taken back from Boko Haram by the military, to a camp in Maiduguri.

Electoral officials stressed that once voting starts it will not end until the last person in line has voted, even if it takes all night.

If Nigerians are unhappy with their leaders, can they vote them out in a peaceful, free and transparent way?

That’s the test of Saturday’s Presidential and parliamentary elections in Africa’s largest democracy.

If they do vote out President Goodluck Jonathan, and the ruling People’s Democratic Party which has ruled Nigeria for 16 years, since the end of military rule, it would be the first peaceful handover of power from one democrat to another in the country’s history. In this case – to the key presidential opposition candidate, Muhammadu Buhari of the All Progressives Congress.

More than $40m has been spent on these elections by the election commission. Close to 60 million people have collected voter cards to participate. And there are more than 120,000 polling stations around the country.

The winner in the presidential race needs 50% of the vote plus 1. And at least 25% of the vote in 2/3rds of the country’s 36 states to win. And thousands of parliamentarian running for around 500 seats, a simple majority.

It’s a colossal logistical challenge – in a country with porous borders and uneven infrastructure. But the voters we met at polling stations in Abuja were not put off.