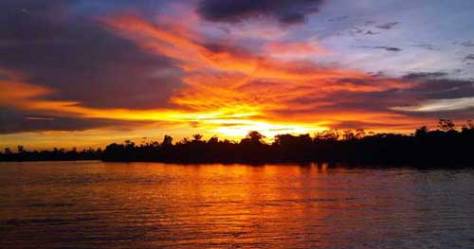 As Peru continues to push an expansion of oil activities in the Amazon, there’s a new Canadian oil company with grand ambitions. Calgary-based Gran Tierra (“Great Earth”) recently burst onto the scene, gobbling up strategic oil reserves in the northern Peruvian Amazon. But these blocks have been steeped in controversy, forcing oil majors like ConocoPhillips to pack up and leave. Does Gran Tierra not understand the risks they are running, or do they believe they are somehow immune? Whether naïve or just arrogant, they are in for a rude shock.

Oil in the Peruvian Amazon – A snapshot history
Peru’s northern jungle province of Loreto has been source to most of the country’s oil extraction. Of this, the lion’s share originated in blocks 1AB and 8. Occidental Petroleum pumped from the early 1970’s on, polluting the streams, forests, and people. Since 2000, Pluspetrol assumed these operations, only starting to re-inject poisonous ‘formation waters’ in 2007 following crippling indigenous protests. Their aging pipeline infrastructure continues to spring dozens of spills annually. In recent months, local indigenous communities have forced the Peruvian government to declare large swaths of the rainforest as ‘environmental emergency zones’.
ConocoPhillips – Pragmatism rules over pretensions
The Houston-based company once held ten million hectares in contiguous oil blocks. In recent years, however, they progressively scaled back. In 2007 they released half of block 104, following Achuar indigenous protests in the Corrientes watershed. According to a Wall Street Journal article published 20 December 2007, “Conoco pulled out under pressure from Achuar Indians, who protested at the company’s Houston headquarters wearing traditional robes and headgear and lobbied shareholders with the help of Amazon Watch, a U.S. environmental group. “We aren’t interested in operating counter to the interests of the [local] population,” says a ConocoPhillips spokesman.”
Pressure continued at the international and local levels. On one hand, Amazon Watch and activist shareholders attended Conoco’s annual meetings in Houston, raising ongoing concerns about uncontacted peoples in Block 39, along the border with Ecuador, and the very ecologically sensitive nature of their other blocks. As significant, if not more so, a citizen’s movement emerged in Iquitos – called the Water Defense Committee – protesting Conoco’s oil concessions. The drinking water for over half a million residents is provided by the Nanay river basin, right in the heart of blocks 123 and 129. In 2012, thousands took to the streets in protest, certainly facilitating Conoco’s final announcement in October to leave the region.
New Kid on the Oil Block – Gran Tierra gets in the game

Apparently not ones to allow a good crisis go to waste, Gran Tierra stepped in to fill the vacuum left by Conoco’s departure. Whereas they had been minority partners in Conoco’s blocks, they took over as the operators. Additionally, in early 2013 they acquired operation of Block 95, running from the banks of the Ucayali River eastward towards close to the border with Brazil, overlapping with the buffer zone of Peru’s largest National Reserve Pacaya Samiria.
Gran Tierra was featured in a paid insert promoting oil activities in Peru, placed in the June 3, 2013 edition of Oil & Gas Journal. The company’s Country Manager was quoted as noting that Conoco “found a series of geological structures of amazing size. There are about 14 structures ready to be explored.” According to an earlier terms-of-reference document for these oil blocks, this exploratory project could call for 16 drilling platforms, most within the Nanay watershed.
What’s wrong with drilling the Nanay? Beyond the fact that a major city’s water supply hangs in the balance, this is one of the most fragile and significant eco-regions in the Peruvian Amazon. According to Corine Vriesdendorp, PhD, who participated in the 2006 Rapid Biological Inventory in the area, “Biodiversity in the Nanay basin is spectacular. In three weeks we recorded more than 1,800 species of plants and animals. Because the Nanay River begins in the Peruvian lowlands – not in the Colombian or Ecuadorian Andes like many other rivers in Loreto – it created a singular opportunity to conserve almost the entire watershed… Now oil activities threaten to negatively impact both water quality and fish stocks, critical for forest dwellers in the Nanay basin and urban residents in Iquitos.”
In 2008, the regional government of Loreto, through their environmental office, proposed the creation of a Regional Conservation Area (RCA) to protect this fragile water shed and biodiversity hot spot. The RCA was formally created in 2011. That same year, in 2011, SERNANP, (The National Service of Natural Protected Areas), published a resolution which declared hydrocarbon activities incompatible with the objective of the Nanay’s conservation. However, in 2012 the resolution was annulled, without further explanation, by the incoming administration of SERNANP under current President Ollanta Humala.
This year, however, a number of areas in the region have been declared by the Peruvian Ministry of Environment as “environmental emergency zone”, a result of the decades of drilling and associated pollution. Paradoxically, the national government is both recognizing the tremendous and ongoing negative impacts of oil operations, while paving the way for much more of the same.
Rise of the Water Defense Committee
Responding to the threat to Iquitos’ primary water source, a coalition of local environmentalists emerged in late 2011 as the Iquitos Water Defense Committee. Co-founded and supported by Alianza Arkana, a Peruvian environmental and human rights NGO, the Comité de Agua came to include actors as varied as student groups, concerned citizens, indigenous peoples and various civil society organizations. The Committee organized significant grassroots mobilizations, like a late-May protest in the streets of Iquitos, in which thousands of people marched to protect the city’s water.
With Conoco’s departure, the Comité de Agua has not disappeared, but is in fact only gaining strength and profile. Last month they convened a Regional Summit for the Defense of the Amazon Rainforest; over 300 participants, including various professionals, pupils, indigenous leaders, and Peruvian congresswoman Verónika Mendoza, discussed the importance of the Nanay, and the right to clean water as a basic human right. The conclusions of the summit are summarized in the Iquitos declaration, a statement which demands that the Nanay be a watershed free of extractive and destructive industries and calls for the development of alternative and truly sustainable development initiatives, based on indigenous know how and a sustainable use of the incredible biodiversity this watershed holds.
This united front of concerned residents of Iquitos is calling for a moratorium on any kind of extractive activities, oil and otherwise, in the precious biological corridor that is the Nanay river basin. A moratorium would necessarily mean that the Peruvian government annul the two oil concessions overlapping the Nanay watershed – Blocks 123 and 129. The Iquitos Water Defense Committee seeks lasting protection of this crucial source of drinking water, and as such, a crucial source of life.
Call to action
Join the Comité de Agua and thousands of people from around the world in calling on Peruvian Minister of Energy and Mines, Jorge Humberto Merino Tafur, to revoke the oil concessions over the Nanay and declare a moratorium on any future extractive activities in that watershed. [ ]Sign the Avaaz petition today!