The programme heard from recent victims who told of severe beatings and sexual assault. END_OF_DOCUMENT_TOKEN_TO_BE_REPLACED

JAPAN – Japan’s Prime Minister Naoto Kan has renewed his pledge to work towards a nuclear-free Japan as Hiroshima marked the 66th anniversary of the US atomic bombing.

Speaking at a ceremony on Saturday, devoted to the victims of the bomb that killed more than 100,000 people, Kan said the meltdowns at the Fukushima plant after a March earthquake had convinced him Japan should aim to end its dependence on nuclear power.

“The large-scale, long-running nuclear accident has triggered radiation leakage, causing serious concerns not only in Japan but also in the world,” Kan said. END_OF_DOCUMENT_TOKEN_TO_BE_REPLACED

Eye on the Amazon
Gregor MacLennan 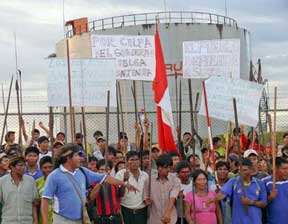 The Democratic Republic of Congo (DRC) has entrusted a Canadian company with managing a vast section of its forest, including containing deforestration, the environment ministry has announced. END_OF_DOCUMENT_TOKEN_TO_BE_REPLACED

By Mario Osava*
RIO DE JANEIRO, Aug 4, 2011 (IPS) – Default, insolvency, fiscal irresponsibility, debt crisis and similar terms form part of the vocabulary used to describe countries in the developing South in the 1980s and 1990s. A decade later, the world seems to have turned upside down. END_OF_DOCUMENT_TOKEN_TO_BE_REPLACED

Shell faces a bill of hundreds of millions of dollars after accepting full liability for two massive oil spills that have devastated a Nigerian community of 69,000 people and may take at least 20 years to clean up.

Oil spill experts who have studied video footage of the spills at Bodo in Ogoniland say the spills could together be as large as the 1989 Exxon Valdez disater in Alaska when 10m gallons of oil was spilt. Until now, Shell has claimed that less than 40,000 gallons were spilt. END_OF_DOCUMENT_TOKEN_TO_BE_REPLACED