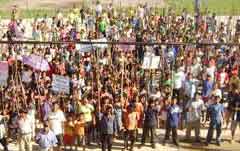 Amazon groups continued their demonstrations to demand a that the decrees be thrown out completely. (Photo: AIDESEP) Peruvian lawmakers voted to suspend two legislative decrees that sought to open up Peru´s Amazon Basin to large investment projects, sparking more than two months´ of protests by indigenous groups in the country´s jungle.  Despite this vote, which came in the wake of deadly clashes between protesters and the police in northern Peru that left dozens killed, a true dialogue with the government is still blocked and protests are continuing. Peru´s unicameral legislature voted with 57 votes in favor — by the ruling Aprista Party, the center-right National Unity and another bloc of supporters of jailed ex-President Alberto Fujimori — and 47 against. Nationalist and left-leaning groups who voted against the measure said the decrees should have been completely revoked, not just suspended.

The laws, part of a package of decrees issued by President Alan García, in order to implement the free trade agreement with the United States, infuriated the indigenous groups of Peru´s Amazon Basin. It was the second time in less than a year that following their demonstrations, however, the Congress voted to revoke or suspend García´s decrees to draw investment to their homeland.

The package of nine decrees seeks to increase the area of lands used for farming and limit indigenous peoples´ access to these lands, as well as easing requirements for exploitation of natural resources such as minerals and hydrocarbons under the soil. Under Peruvian law, citizens do not own subsoil resources.

The two most controversial of the decrees, particularly 1090, the so-called “Forest Law,” sparked massive demonstrations, as indigenous groups in the Amazon Basin complained that it will limit their access to the forests. The other decree, 1064, they say violates communal land rights, by opening up these areas to farming.

The suspension of these decrees is a veiled abolishment that tries to hide the political failure,” said Juan Carlos Ruiz, a lawyer with Peru´s Legal Defense Institute. The vote came after fatal clashes between police and members of the Awajun people ended with 23 police officers killed and, according to indigenous leaders, at least 22 indigenous Peruvians dead. The government said only nine protesters were killed.

The clash occurred when police tried to break up a blockade of the Fernando Belaunde Terry Highway in the northeastern city of Bagua, where indigenous groups had been protesting for more than a month, adhering to a call for strikes by the Inter-Ethnic Association for Development of the Peruvian Jungle, or Aidesep, an umbrella organization of Amazonian indigenous groups. Any attempts at dialogue derailed, and the clash took place as the protests completed their 54th day.

Attempts by the government to negotiate with Aidesep´s president, Alberto Pizango, who has been granted asylum in Nicaragua after Peruvian authorities issued a warrant for his arrest, were weak. The indigenous side would not budge either, demanding that the decrees be completely revoked, not modified. “Our brothers were not heard,” said Fermín Tiwi Paati, a lawyer for the Awajun people. He says the decrees are “unconstitutional and hurtful to the indigenous peoples´ ancestral land rights because they violate the right to be previously consulted,” a key aspect of the International Labor Organization´s (ILO) Convention 169 on indigenous peoples.  “For us, the territories include the forests, animals, our language, our ancestors,” said Tiwi. “Everything is connected.”

This movement, which has quickly gained strength and effectiveness in the past year, has brought to light this different way of thinking, that the land is strongly tied to these communities´ identities, something not generally considered in other parts of Peru, particularly along the urban coastline, where most of the population lives.

An even more tense debate has surfaced following the bloody clashes in Peru. In 1993, Peru´s government added the points of Convention 169 into the national constitution, but it has not fulfilled this part of its law.

In January, the International Labor Organization urged Peru´s government to immediately implement a system of participation and previous consultation for indigenous groups, something that this and previous governments have failed to do effectively.

“One route, for the current problem, would be to take all the decrees to the Constitutional Tribunal, which will have to declare them unconstitutional for failing to fulfill the ILO´s Convention 169,” said Ruiz.

Suffering from the decrees´ suspension — and opposition from within García´s Cabinet (Women´s Affairs Minister Carmela Vildoso stepped down to protest the government´s handling of the crisis) — Cabinet chief Yehude Simon proposed a new dialogue with more members, including more indigenous groups.

“The foremost responsibility of this tragedy falls on Alan García, who by pushing the program to hand over Amazonian lands in large lots to transnational companies, violated the Constitution,” wrote sociologist Nelson Manrique in La República newspaper June 10. Despite this political crisis, García has refused to make any apology or self-criticism and has allowed Interior Minister Mercedes Cabanillas, who has not even said whether she gave the police the order to repress the indigenous groups, to remain in her post.

Even though two of the most controversial decrees have been suspended, protesters marched in solidarity with the indigenous peoples and the complete overturn of this legislation on June 11 in Lima, Arequipa, Cuzco and other cities, and in Yurimaguas, in the northeastern jungle, where the road blockades are maintaining a high level of tension. —Latinamerica Press.